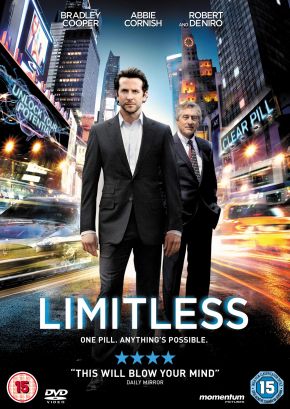 Based on Alan Glynn’s techno-thriller novel The Dark Fields, Limitless (2011) offers up an exciting and intriguing concept, but not one that is wholly original and without blemish. Whilst the film begins with all of the right intentions and with the prospect of an intriguing idea, its climax and post-climactic phases undo the impressive job done by its central narrative.

Eddie Morra (Bradley Cooper) is a stalling writer who spends his days drinking, smoking and passing out on the sofa. He lacks true inspiration and as a consequence is spiraling deeper into the realms of self-pity and depression, alienating those around him. At the depths of his despair he has a chance encounter with the brother of his ex-wife who tempts him with a revolutionary new drug that allows him to access 100% of his mind.

At once, Morra’s mind is in touch with everything he has ever read, seen and heard and he is able to draw upon this newfound vast knowledge to finally make something of his life. His meteoric rise is his saving grace and his downfall as he attracts the attention of big business and the criminal underworld all at once, presenting an exciting and adrenaline-soaked rush to what can only be described as a disappointing climax. 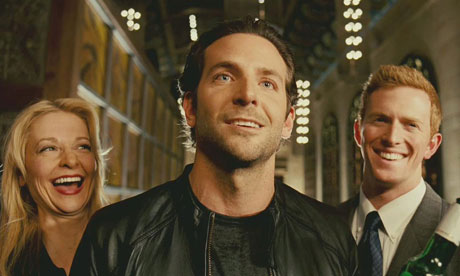 Limitless’ conceptual flaw lies in what follows and as a critic it would be wholly unprofessional to give that away. However, be prepared to be entertained and thrilled but also get ready for a frustrating anti-climax that deconstructs the brilliant excitement and resulting intrigue of what came before. Throughout the film we are given insight into the films ideas allowing us to accept all of what takes place within the realms of relative believability, but the post climactic phase of the film tears that apart by clothing its final idea in ambiguity.

Nonetheless, Limitless is thrilling in places and ticks all of the right boxes for an entertaining dose of Saturday night excitement. The performances of Cooper and Robert De Niro (as Wall Street tycoon Carl Van Loon) go a long way to helping its cause as both provide a powerful portrayal of their respective characters. Support comes from Abbie Cornish and Anna Friel whose respective characters serve as representative embodiments of Morra’s potential for greatness or failure.

When all is said and done, it is obvious that Limitless was not developed to embody deep and powerful political values, but instead to serve as an entertaining populist film with an underlying critique of modern day society and its reliance on drugs. Unfortunately, Limitless ultimately fails on its inability to consistently make its ideas sit within the realms of believability, which unfortunately is the linchpin of its entire concept.