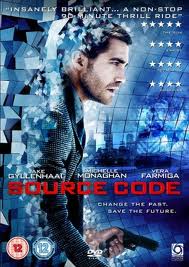 Dazed and confused, Colter tries to establish how he got there but before he can get his hands on an over priced chicken sandwich the carriage is consumed by flames and the train explodes.

Colter wakes up again but this time he is strapped into a metal capsule in what appears to be a military base. On a screen in front of him is the face of Sergeant Colleen Goodwin (Vera Farmiga) who informs Colter the train he had been on was the victim of a terrorist attack and he been transplanted into the body of one of the victims, via the ‘Source Code’ project, to investigate who blew up the train.

Unfortunately due to the limitations of Source Code he only has eight minutes in which to carry out his mission and if he doesn’t succeed he will be transported back to the capsule and returned to the train for another eight minutes until his mission is complete. 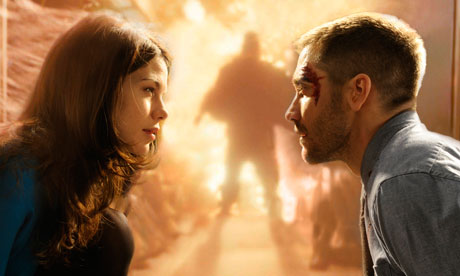 That’s about all you need to know plot-wise and any further description would spoil the broth, but rest assured that Source Code supplies plenty of action, tension and unfathomable science for you to suck on for 90 minutes.

Discerning fans of my favorite childhood TV series Quantum Leap will recognize the whole time traveling body switching idea. During one scene Colter looks into the bathroom mirror and sees another reflection staring back at him and I thought for a moment he was going to utter the immortal lines ‘Oh boy’ and I was slightly disappointed that he never. The writer missed a trick and it would have been a perfect homage to the show which was obviously the biggest influence on the Source Code script.

I’m not usually fan of Jake Gyllenhaal. Since Donnie Darko (2001) he’s found himself on leading man duty in lots of average films and in his best flick of the last ten years, Brokeback Mountain (2005), the late Heath Ledger’s performance proved that he was by far the most talented actor of the two. He does a fine job here though as the heroic solider determined to finish his mission and it turns out that he does have the acting chops which I previously thought were lacking.

Some critics have slated Source Code for its eagerness to get to the pay off at the expense of a solid plot but I don’t think the film suffers as a consequence and complaints about the implausibility of leaping into dead men’s bodies are ridiculous. This is high quality science fiction at its very best and if you’re unable to suspend disbelief then stick to documentaries.