Brazilian director Jose Padilha returns with Elite Squad: The Enemy Within (2010) – aka Elite Squad 2 – the sequel to his critically acclaimed Elite Squad (2007) which since its release has been bestowed with numerous awards, including the Golden Berlin Bear Award at the 2008 Berlin International Film Festival.

Padilha’s sequel continues as a semi-fictional account of B.O.P.E. (Batalhão de Operações Policiais Especiais), the Special Police Operations Battalion of the Rio De Janeiro Military Police which places its focus on the relationship between law enforcement and politics.

Following the bloody aftermath of a disastrously handled prison riot, Nascimento (Wagner Moura) gets caught in a bloody political dispute that involves not only government officials, but also the deadly paramilitary groups known as the ‘milicias’. Adding to this are his troubles at home, as his ex-wife is now married to the newly elected State Representative and his thirteen year old son is becoming increasingly estranged from his intense and emotionally distant father.

As Brazil’s all-time largest box office ticket seller, a weight of expectancy has been placed upon the international release of the film and with the Brazilian film industries’ involvement with producing high quality socially critical films, that depict the depravity, corruption and social disparity that exists within Brazilian society (Carandiru [2003], City of God [2002]), Elite Squad: The Enemy Within faces a real struggle to impress. 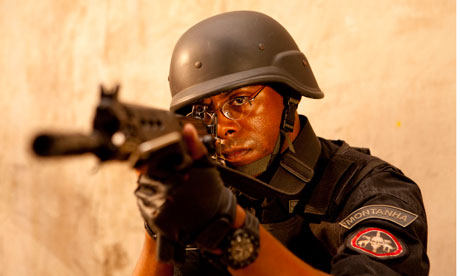 In a similar fashion to those Brazilian-made films that have made the transition from national success to international acclaim, Pidilha’s film hammers home a depiction of a complete and utter disregard for humanity orchestrated by those in a position of political and/or social power – a theme which appears to be an omnipresent in Brazilian cinema since the turn of the century – arguably reflecting a Brazilian cultural backlash against what is seen as a system that suppresses dissent towards hegemonic values and views.

The distancing gaze offered by the filmic portrayals of this corrupt and socially inept world provides outside audiences with a gritty realism that is engaging but far-removed from their own lived experiences. In recent years the brooding and evocative style seen in films like those aforementioned has become increasingly in vogue and has obviously played some part in influencing or at least drawing attention to the rise the hugely popular Nordic Noir, which offers a similarly graphic and bleak view of the internalized mood of a nation.

However, it is fair to say that such analysis could detract from whatever individual qualities the film offers in isolation, as it does have moments of well-written drama supported by the strong performances of the cast members in its central roles. It also offers empathetic cinematography that captures the raw urban locale of Rio, reflecting the film’s narrative in a deeply evocative manner. Like City of God, gunfights and the vast majority of key events take place in the streets of the city, and the claustrophobic framing of this tiny space communicates a sense of social disparity and segregation.

Brazilian crime/drama seems to rely on the buildings and landmarks of its overly populated cities to symbolise and/or signify the feelings and attitudes of its culture. The streets are framed to convey their real labyrinth-like fashion, evoking a sense of entrapment and a feeling of no-way-out that clearly reflects the lives of those that live within the restrictive confines of the lower echelons of Brazilian society; and the performances by the central figures of the cast, including Wagner Moura (Lt Colonel Nascimento), Irandhir Santos (Diogo Fraga) and Andre Ramiro (Captain Andre Matias) with their deeply embedded issues and values help to perpetuate the theme of an internalized struggle.

Its moments of action, along with its depiction of deeply entrenched social issues and politics, accompanied by an intensely provocative script makes Elite Squad: The Enemy Within a tough, but vital watch.