The Debt’s depiction of 1960’s East Berlin is everything you imagine it to have been. From the rundown tenement which Rachel, Stefan and David use as the headquarters for their audacious plan, to the utilitarian hospital where Vogel works – devoid of all but the essential medical amenities – everything has a heavy, seeping greyness, colouring not only the people on the streets and the leaden sky above, but every aspect of their suspicion ridden existence. 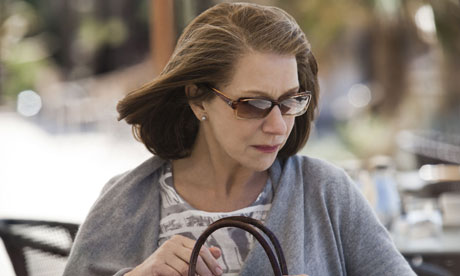 The relationship between the three young protagonists is also full of awkward unease. Their initial wariness of each other intensifies when Vogel is forced upon them as an unwelcome house guest who mixes up their already confused feelings, playing on each of their insecurities in true Nazi fashion.

However, though the men are undoubtedly central to the story, it is Mirren and Chastain you’ll remember after the final credits. Mirren injects the older Rachel with enough pathos to make you forget she could play the role of a hardened woman in a man’s world in her sleep, whilst Chastain is wonderfully vulnerable as the younger incarnation, caught in a deadly game between David, Stefan and Vogel.

Vaughan and Goldman’s sense of adventure, previously seen in their collaboration on X-Men: First Class (2011), is never far away. Along with Straughan, they lace proceedings with just enough edge-of-your-seat jolts, yet never trivialise the serious reality behind their story. In fact this fine balance might suit them (if they haven’t already been asked) to take the aforementioned Mr. Bond in a modern direction, which might just save his often precarious future.

One could question whether life should still be found in the subject of the Nazi war atrocities for entertainment purposes. However, when something as thought provoking as The Debt emerges, the answer must be yes.