Anna Faris, Chris Evans and Martin Freeman star in Mark Mylod’s romantic comedy What’s Your Number? (2011) based on the Karyn Bosnack novel Twenty Times A Lady. An early Apollo Cinema screening of the film was also followed with an interactive Q&A with lead actress, Anna Faris, courtesy of LOVEFiLM.

A surprising amount of laughs and solid comedic timing bring Karyn Bosnak’s novel to life in this frivolous take on the classic tale of finding ‘Mr. Right’. Faris’ brand of down-to-earth goofiness serves to separate the character of Ally Darling from the unrealistic, ‘having it all’ clichés which have plagued our screens thanks to franchises like Sex and the City and, more recently, the aptly titled I Don’t Know How She Does It (2011).

By dealing with promiscuity through the eyes of a female lead, What’s Your Number? promises much more than your usual vain or overly idealistic romantic comedy. This film, along with many other female comedies, are a beacon of hope for relatable representations of women. As Faris highlighted in the Q&A “of course there is an appetite, because this is like the people that we know, they behave like this, they talk like this.” 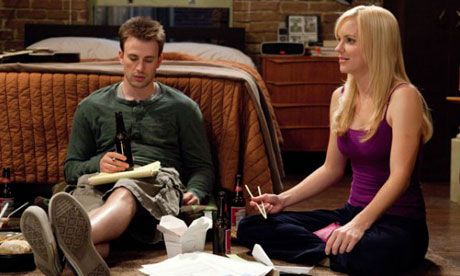 The expectation still remains, that even as women progress in comedy, unlike their male counterparts, they still need to tick all the same beauty boxes as other Hollywood actresses. Faris is certainly testament to this.

Her admittance in the Q&A that Scary Move (2000), arguably her breakthrough film, “is not very well respected in the industry” is hardly revelatory, but suggests comedy has been accidental to her. Now it’s a double edged sword – as much as it has provided her with a career, it has also typecast her. But Faris’ eagerness to break into other acting roles clashes with the spirit of the film and the momentum it represents.

Unfortunately, aside from Faris, most of the characters in the film are dull and uninspiring, with Chris Evans’ Colin Shea isn’t a huge departure from the personalities he has played before. In addition, the plot is equally – if not more – predictable than rom-coms that have failed to raise half as many smiles, or even go near the same subject matter.

Whilst What’s Your Number? comes close to making a statement on the distinction between ‘comedies with women in’ and the dated, chick-flick style ‘comedies for women’, its message ultimately falls flat. Fundamentally, the film is neither a strong-enough comedy in its own right, nor is it intelligent-enough to challenge any of the sexual double-standards which it attempts to explore – in fact, it quite definitely reinforces them.