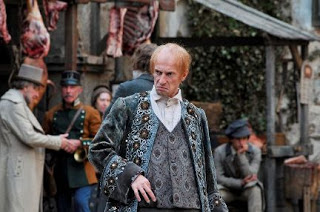 Alexander Sokurov’s Faust (2010) – awarded the Golden Lion at this year’s Venice Film Festival – begins high above the earth, gazing into a mirror that looks like a cinema screen, before we – flapping and twirling in the wind – descend towards a teeming city, a cramped besieged metropolis; part-European citadel, part biblical-Babel.

This is the prologue to what can be seen as the second opening shot. Again, we hover over a globe, but this is the hairy sphere of what is slowly revealed to be a dead man’s testicle, who is in the midst of an autopsy. Guts spill out as Faust (Johannes Zeiler) and his queasy assistant Wagner (Georg Friedrich) argue about the location and existence of the soul. Heady stuff certainly, but ballsy as well.

In a remarkable and ultra-physical performance, Zeiler gives us a staggering, stumbling, careless and forgetful Faust, constantly muttering and undecided, fickle in his attentions, alternately high-minded and yet lusting after the beautiful Gretchen (Isolda Dychauk). He seems pushed through the world by forces not entirely in his control. “Unhappy people are dangerous”, he mutters prophetically.

Mephistopheles is perhaps the most radical re-reading. In Sokurov’s version of Geothe’s epic, he is transformed into a sleazy money-lender, played by Anton Adasinkiy, a Russian clown and mime. Rather than a cape-wearing, wittily persuasive and suave Devil, he is a Barbapapa-shaped freak, constantly complaining about his digestive system and given to breaking wind and defecating at inopportune moments.

Like something out of a more Baroque version of Samuel Beckett novel, the majority of Faust is based around this comic/tragic pairing and their endless squabbling and joking, conniving and negotiating. Mephistopheles and Faust are like two codependents, trapped in a weirdly toxic relationship from which neither one truly profits.

The city is in itself another character, an elsewhere, with elements of hell and purgatory, filmed with a carnival-esque verve: distorted funfair mirrors, blurred images and constant sepia tea stained colour scheme, as if the film itself was a mouldy old tome. This is partly the work of Bruno Delbonnel, who had previously made a name for himself through his collaborations with Jean-Pierre Jeunet and Julie Taymor.

The colour scheme is in fact one of the things I like least about Faust. As with Amelie (2001), Delbonnel imposes a narrow and limited palette to the film, robbing it of any real sense of realism. He drenches the film in autumnal tones, but at the expense of a more varied and engaging visual experience.

Sokurov’s Faust has the feel of something that will be talked about for years, a fine film closing a tetralogy – the other films being Moloch (1999), Taurus (2000) and The Sun (2005) – which will likely be regarded collectively as Sokurov’s masterpiece. Although he has publicly commented on his discomfort at being in competition with younger directors – who he feels deserve more encouragement than he needs affirmation – no one can begrudge him the Golden Lion win, surprisingly his first major international award.