★★☆☆☆
Rumours are currently swirling around the internet as to the identity of the ‘Surprise Film’ at this year’s 55th BFI London Film Festival, with Simon Curtis’ My Weekend with Marilyn currently a strong contender alongside Bruce Robinson’s The Rum Diary and Brad Pitt’s Moneyball. However, one film has already screened at this year’s LFF that (admittedly indirectly) explores the life of the iconic Marilyn Monroe – Gérald Hustache-Mathieu’s Nobody Else But You (Poupoupidou, 2011).

French actor Jean-Paul Rouve plays David Rousseau, a crime writer who unfortunately finds himself stranded in the snow-covered town of Mouthe, Eastern France. However, his luck soon changes as he hears about the recent, suspicious death of local bottle blonde icon and weather girl Candice Lecoeur. With new found inspiration for his next book and an unhealthy obsession with the deceased, David soon discovers that Candice’s death may not have been the simple suicide that the local police force are peddling – and that some members of the community would rather he drop his investigation. 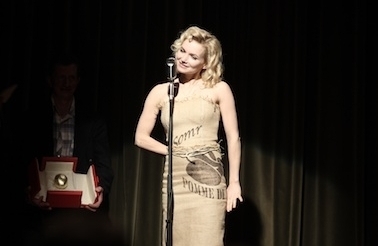 Unfortunately, despite a promising premise and solid cast, Nobody Else But You turns out to be a bland, mildly amusing thriller with a vaguely noirish sensibility. The humour is largely broad and by-the-numbers, with most of the film’s best comic moments coming from Rouve’s deadpan delivery. You do get the niggling feeling throughout that this is France’s answer to a middle-of-the-road, UK comedy – a Richard Curtis-esque effort for our Gallic cousins.

Another issue with the film is that by basing Miss Lecoeur’s rise and fall on that of Monroe, we’re never really shocked or engaged when she falls into the arms of a local politician or courses an uproar my singing a seductive rendition of ‘Happy Birthday’ to him publicly.

You get the sense that Hustache-Mathieu would have preferred to direct Curtis’ My Weekend with Marilyn, producing a straight biopic of the 20th century star rather than shoe-horning her story into his murder-mystery. Uninspired, uninteresting and, in all honesty, strikingly ‘un-French’.