Buffy the Vampire Slayer – Season 8 Motion Comic (2011) is a nineteen episode series that picks up a few years from where the televised series left off, in an attempt to extend the ‘Buffyverse’. After destroying her hometown of Sunnydale in order to save the world, Buffy Summers is now the leader of a whole new tribe of slayers, with the help of friends Willow and Xander (the latter of which is now a qualified ‘Watcher’).

For anyone who watched the first seven seasons of Buffy, the prospect of an eighth – no matter what the format – is enticing to say the least. Bringing to life the stagnant panels of the comics on which it is based, this DVD release reeks of both a desire to revisit a show that was satisfyingly bookended eight years ago, and a desperation to flog what is effectively a dead horse. Answering a seemingly widespread call for more material, Joss Whedon has returned to the show that gave him his name, producing a messy, thinly-plotted and overcast imitation of a once great product. 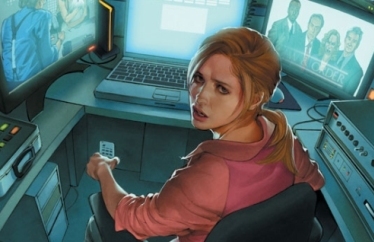 Nothing here matches the original show. The voice cast has changed from the memorable patois of stars like Sarah Michelle-Gellar and Alyson Hannigan to non-distinctive actors who fail to imitate their previous equivalents. Various other plot points, like Willow’s ability to fly, Buffy’s flirtation with lesbianism and Dawn’s inexplicable transformation into a giant (and, later on, a fawn) are all bafflingly obtuse and garish.

Something the show did well – and which is rarely emulated here – was to balance its supernatural world with the trivialities of the everyday, exemplified in particular with the passing of Joyce, Buffy’s mother, which left her kicking ass whilst keeping her house and family afloat. However, Season 8’s reality is exaggerated and over-the-top, dragging the story into an amplified 21st century. In one of the disc’s few special features, ‘Under Buffy’s Spell’, series scribe Jane Espenson states that the comics have allowed them to tell stories “you couldn’t tell on the show”, yet this has merely spurred them on to create an outlandish, alien world that bears no semblance to what has come before.

Reminding one all too easily of the thankfully short-lived Buffy the Animated Series, the Season 8 Motion Comic is yet another botched attempt at prolonging a terminated show. Despite its latter-stage merger with the unfamiliar comic series Fray, its cheap, de-fanged plot, weak characters and laughable jargon upsets a franchise once settled in the collective memories of an ardent fan base, contented with its dénouement.