Out of necessity, Kim applies for a job as a chalet girl to cater for an affluent family during their holiday in a luxury cottage in the Alps and, despite not adhering to the vacancy’s description in any way, she gets the role. Once there, Kim meets her co-worker, snobbish bad-girl Georgie (Egerton), as well as the posh owners of the chalet and their rebellious son Jonny (Westwick), who has everything in life and yet is still unhappy. In an experience that will change her whole existence, Kim finds love along with new friends and a new purpose in life. 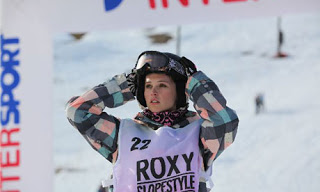 Chalet Girl’s plot, characters, themes, situations and even dialogue have all been seen – and heard – before in other romantic comedies. Kim is supposed to be quirky, likeable and contemporary, yet she really is – right down to her physical appearance – just a washed up, less-inspired British interpretation of Ellen Page’s Juno. Kim’s relationship with the outspoken, bossy Georgie resembles Anne Hathaway and Emily Blunt’s initially antagonistic combination in The Devil Wears Prada (2006), only far less funny and witty.

In addition, Kim’s newfound love for snowboarding is just another take on the ‘calling’ that worked so well for movies like Flashdance (1983) and Fame (1980), yet many films have reinterpreted it without the same conviction – and Chalet Girl is one of them.

Struggling with an uninspired script (which features the line “I always tell the mountains my problems. They are good listeners” amongst others), the film’s plot progresses in a scatty, often dull fashion with a number of sexist references, clichés and frankly implausible situations which the actor’ unremarkable performances half-heartedly bring to life. Fans of pretty-boy Ed Westwick may still enjoy Chalet Girl, but the large majority won’t regret giving this one a miss.