Tilva Ros (2010) is easily the finest film of this year’s Raindance Film Festival and outside of that favourable context, still one of the most satisfying dramas in a year that has brought us Nicolas Winding Refn’s Drive and Tomas Alfredson’s Tinker Tailor Soldier Spy. Nikola Lezaic’s debut feature is a marvel, without being on any tangible level particularly original or radical – this is a film that knows exactly what it wants to be and confidently succeeds on every count.

Tilva Ros’ tender and aimless evocation of that summer in every person’s life where the crossing into adulthood and responsibility looms large – be it in the form of university, moving out of the family house or getting a job – is realised so perfectly and so effortlessly that the experience becomes akin to discovering an old reel of super 8 and transforming your attic into a nostalgic showroom.

The film follows Toda (Marko Todorovic) and Stefan (Stefan Djordjevic), two skaters from the Serbian town of Bor, a diminished copper mine that hosts and informs the central relationship, personal tragedy often framed against wider scenes of union protest – sometimes completely out of focus – as though dwarfed by the apocalyptic daily tragedy of teenage life. 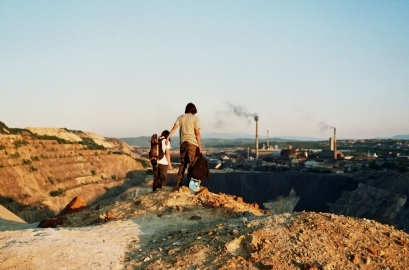 This is the world the boys will soon inherit. Shooting ‘Jackass-style’ stunts in their spare time, the boys’ friendship is strained by the introduction of Dunja (Dunja Kovacevic), a laid back tomboy for whose attention they begin to vie.

Making inspired use of the desolate surroundings the gang adopt as their stomping ground, and equally inventive compositional choices, Tilva Ros plays with extreme subjectivity in its use of shallow focus, often bringing the back of a character’s head into into sharp focus, inviting us to view the world from their lonely perspective and ponder the unreadable reverse of their face, denied even an expression to scrutinise.

The style, though as fluid as the character’s hormonal mood swings, bears some comparison to that of Gus Van Sant’s excellent Elephant (2003), though when viewed in relation to Van Sant’s similarly styled but woefully misjudged Paranoid Park (2007), Tilva Ros shines even brighter.

Nikola Lezaic’s Tilva Ros could never be considered a life-changing film, though its ability to revisit and replicate universal moments that truly were is an astonishing achievement and one that should be cherished.