Deadly Blessing (1981) has the potential to be a classic, but ultimately fails to deliver what matters most in a horror film – namely horror. Terror maestro Wes Craven’s fifth directorial outing, and the first main feature for an as yet unknown Sharon Stone (the infamous ‘base’ years were still some way off), this film has built a cult reputation, though one could be forgiven for wondering why. Following the death of her husband in a farming accident, young widow Martha (Maren Jensen) and her friends Lana and Vicky (Sharon Stone and Susan Buckner), are terrorised by a community of Hittites, of which Martha’s husband was a member. 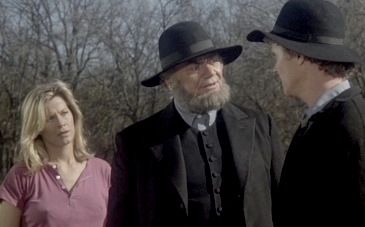 Deadly Blessing would be better retitled ‘Deadly Bore’. Plodding along for 90-odd minutes, you are lulled to sleep with long segments of beautifully shot prairie vistas (save for the occasional sporadic jolt mainly involving spiders). However, unlike the vast acres of Texan farmland, the story’s characters have no real depth, resulting in the viewer finding it hard to care what happens to them (a major defect, particularly in a horror film).

The Hittites are a weird religious group ruled with fear by their elder Isaiah Schmidt, a creepy performance by screen legend Ernest Borgnine. However, you never find out anything about them or their real beliefs, whilst Stone and her two friends are merely there to run around and act as typical women in peril. The real difficulty with Deadly Blessing is that it’s not what you expect from Craven. The man who could be said to have initiated the ‘torture porn’ genre with such gems as The Last House on the Left (1972) and The Hills Have Eyes (1977) plays against form by trying to give the viewer a study in slow boil inference, as opposed to in-your-face viscerality.

Apart from the legendary bath scene and a particularly nasty caning of a young boy by Borgnine, there’s nothing more scary here than you’d find in a made for television potboiler. Watching Deadly Blessing now in the light of Craven’s later films, it could almost be seen as a test run for those starring the razor-fingered Freddy Krueger, from its poster art of a girl in bed to the aforementioned bath scene. Thank goodness it all came together more effectively on Elm Street.