As the gang responsible for Chicken Run (2000), Flushed Away (2006) and – of course – the Wallace and Gromit series, Aardman Animations have turned their hand to festive frolics with latest film Arthur Christmas (2011). It’s great fun in places, and the humorously pompous British cast – including James McAvoy, Jim Broadbent and Bill Nighy – breathe some genuine charm into its child-friendly narrative.

As the sensitive but clumsy son of Santa Claus (Broadbent), Arthur (McAvoy) has a love for all things Christmas. His only problem is that he has a reputation within his family and amongst the elf community of being a bit of a liability, managing to cause a kerfuffle wherever he goes, leaving many of the elves asking whether Arthur really belongs in the South Pole. 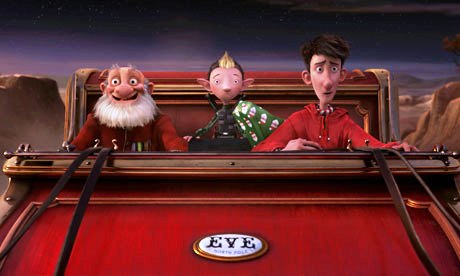 Arthur’s older, caffeine-fueled brother Steve (Hugh Laurie) has helped turn Christmas into a high-tech affair, with the delivery of presents now a heavily-strategic, turnover-driven procedure. But when it appears that there has been a bit of a blunder in the high-tech Christmas machine, Arthur’s love for the season and his Grandsanta’s inability to let go of the past see them set off on an exciting rogue mission against the clock to deliver the last present before December 25.

With Broadbent voicing Saint Nicholas himself, McAvoy providing the voice for Arthur and Extras’ Ashley Jensen providing the cute, Scottish accent for elf Bryony, Arthur Christmas’ characters have plenty of personality and make the film a really fun watch. It’s also short and sweet, with a number of action-packed set-pieces that will keep the younger folk among us occupied for its entirety.

In addition, the faultless animations provided by Aardman offer the characteristically caricatured depiction of humans that we have become accustomed to from their productions, and as a result they are believable, acceptable and magical all at the same time.

Arthur Christmas offers something a little more exciting and fun than your average Christmas movie fare, at the bare minimum, should enable audiences to block out much of the mundane reality of festive period for at least a short time.

Accredited online colleges are one of the options for finding film production programs.