Director Tinge Krishnan’s debut feature Junkhearts (2011) opens with a blurry close up shot of a man in distress, who comes into focus in an almost excruciatingly painful long take. It is a startlingly intrusive introduction to protagonist Frank (Eddie Marsan), and his panicked breathing and tearful face reveal in detail his misery.

Lonely alcoholic Frank, a former soldier serving in Northern Ireland, lives in a grim high rise flat in East London where he deals with the brutally vivid flashbacks caused by post-traumatic stress disorder and the loss of his daughter by self-medicating with cigarettes and miniature bottles of whisky.

Starved of human contact and venturing from the flat only to visit the off-licence, Frank one day witnesses but does not intervene when a drunk socialite vulgarly offers young homeless girl Lynette (Candese Reid) money in exchange for oral sex. Resentful and upset by Frank’s passivity, Lynette rages at him. The following day Frank returns, buying her lunch and offering her a place to stay, which Lynette warily accepts.

After a frosty start the pair develop a warm friendship and a strong emotional connection. Frank gives her money, advice, and self-defence training, and Lynette becomes a surrogate daughter. Marsan and Reid’s natural chemistry makes the scenes of their characters’ blossoming friendship a highlight of the film. 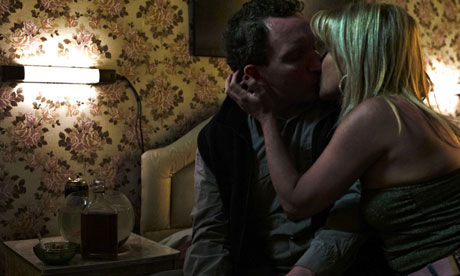 However, the arrival of Lynette’s vile, drug-dealing boyfriend Danny (Tom Sturridge) presents an inevitable crisis. Danny’s Belfast accent brings back terrible memories for Frank and with his defences lowered even further he is left open to Danny’s threats, humiliation, and violence.

Interwoven are separate scenes that at first seem to be from another film entirely, in which successful businesswoman Christine (Romola Garai) struggles to balance a stressful media job with being a single mother and so turns to drugs and casual sex.

It’s not immediately clear how Garai fits within Junkhearts, apart from perhaps as a statement that social standing and money cannot prevent substance abuse, which affects all of the characters as they try to escape from the individual unhappiness. Christine appears to be just as vulnerable and damaged as Lynette and Frank. Yet this storyline is not developed sufficiently, with Christine disappearing from the film completely until a reappearance in the main plot at the end in a ‘twist’ that is contrived and predictable.

Ultimately, Junkhearts is worth watching for the impressive perfomances by Reid and Marsan. Rising star Reid, who won the Best British Newcomer award at this year’s BFI London Film Festival, plays the mouthy but likeable Lynette with an intensity that is honest and unaffected. Marsan is equally moving, and as Frank he drifts through the concrete ugliness of Bethnal Green exuding a quiet desperation as he is tortured by memories of his violent past. Watching Frank alienated and slowly imploding makes for difficult viewing; it is a bold and devastatingly raw performance by an underrated actor.