Directors David Weissman and Bill Weber (The Cockettes [2002]) return to screens this week with the powerful and moving AIDS focused documentary We Were Here (2011), set during the 1970s and 80s in the liberal US city of San Francisco. Drawing on intimate interviews from people who moved to San Francisco in the early 70s, we are introduced to those who first came face-to-face with what would become one of the most terrifying pandemics of the 20th century.

Paul Boneberg is a political campaigner active in the wake of Harvey Milk’s tragic assassination; Ed Wolf, a brave, modern day hero who worked in numerous hospitals and important early AIDS charities – each moved to San Francisco in the hope of finding a place where they would be free pursue life as they both wanted and were meant to live.

Artist Dan Goldstein, nurse Eileen Glutzer (the only female interviewee, who worked on some of the first AIDS medications), and florist Guy Clark also provide insightful, first hand commentary in what is one of the finest factual pieces to be seen in a year that has already produced some excellent documentaries (Senna, Cave of Forgotten Dreams, The Interrupters).

The power of this well-crafted film lies in its honesty – the accounts of Dan Goldstein being particularly moving and powerful. His tragic story of losing multiple friends and two partners is nothing less than harrowing, with the distress compounded by the frank accounts of how – initially – nobody understood what was happening (the crisis began in the mid 70s and the first diagnosis of HIV was in 1981). The public reaction from both the general public and the inhabitants of the Castro was one of utter confusion and fear. 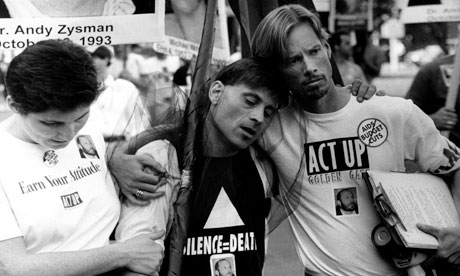 The illness was given crude and derogatory names such as the ‘gay cancer’, allowing the evangelical right to rally against the gay community, spitting vitriolic ideas of divine judgement. We Were Here acts as a poetic antidote to the hate-mongering as it traces the fate of healthy young men who would rapidly become afflicted with lesions and die within days, all accounted and portrayed with love and tenderness.

The sensitive montage of archive footage and photographs, including studio photos of a man wasting away to the bone, is harrowing and yet equally beautiful; the courage of someone agreeing to be photographed at their most vulnerable expresses a central theme of the film – community and compassion.

The story is as much about the strength of the San Francisco gay community as it is about the AIDS crisis. Importantly it encompasses the whole LBGT population, highlighting the solidarity of the city’s lesbian inhabitants during the crisis, conveyed not only in the interviews with Glutzer, but also in the testaments from the male interviewees.

We Were Here is a must-see, and not just for its subject matter. This potent documentary is a brave statement by those involved in its making, released in a time when public attitudes to homosexuality and the AIDS virus are still loaded with fear and ignorance. But equally importantly, Weissman and Weber have created a well-shot and well-edited film that should move all but the harshest of critics.