This week, the Institute of Contemporary Arts are revisiting the work of a cinematic genius with ‘Orson Welles: Postcards from Xanadu’. The season will feature Citizen Kane (1941) and The Magnificent Ambersons (1942), but began with a screening of the restored 1998 version of the classic crime thriller Touch of Evil (1958), starring Welles, Charlton Heston, Janet Leigh and Marlene Dietrich.

To say that Touch of Evil’s post-production process was a little troubled is like saying that film critics ‘sort of’ like Citizen Kane. The story goes that after viewing Welles’ first cut, Universal Pictures were unhappy and proceeded to shoot and insert additional scenes. When Welles saw the new version of the film, he sent Universal a 58 page memo detailing editorial changes which he implored the studio to make. Unfortunately, this impassioned plea fell on deaf ears until 1998, when sound pioneer Walter Murch edited a new version of the film which adhered closely to Welles’ memo.

Touch of Evil takes place on the Mexican/US border, and is a work of sharply contrasting features; American and Mexican, love and hate, good and evil. These features soon begin to blur and merge as nothing within the film is ever quite that simple. However, the initial contrast is perfectly portrayed in the kinetic opening sequence, which communicates a chaotic environment comprised of disparate elements that can only furiously clash and compete with one another. 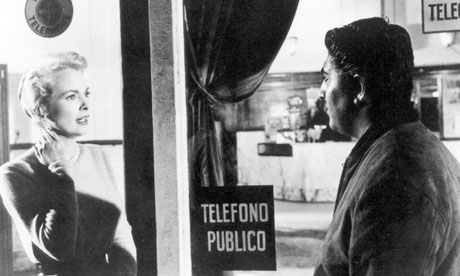 In what is undoubtedly one of the most iconic in cinema history, the opening sequence begins slowly and simply, but the sound and image are gradually layered to build towards a climactic car explosion which kills two people. The film then follows Miguel Vargas (Heston), a Mexican police officer who aids an investigation into the incident which is headed by Police Captain Hank Quinlan (Welles). Recently married to Susie (Leigh), Vargas rallies against Quinlan’s corrupt authority whilst simultaneously trying to protect his new bride from forces which threaten them both.

Touch of Evil is full of bold sequences and striking filmic techniques, but it is also populated by more subtle touches which are extremely revealing. For instance, when a young Mexican attempts to throw acid in Vargas’ face, the ensuing fight ends with the acid destroying the image of a woman on a nearby wall. In retrospect, this scene allows the audience to infer the basics of the Vargas’ subplot a mere 14 minutes into the film; although Miguel is the initial target, his wife will be the one who gets hurt. As is characteristic of Welles, everything is imbued with a deeper meaning and nothing is ever arbitrary.

Once the audience has suspended their disbelief in Heston as a Mexican cop, the cast are simply perfect. Leigh balances Susie’s vulnerability with just enough strength to make each of her claustrophobic sequences extremely uncomfortable for the audience. However, it is Welles and Dietrich who steal the show, portraying characters who could have starring roles in the greatest love story never told. Their scenes crackle with chemistry and subtext, with such convincing performances on display that it is simply impossible to look away.

Touch of Evil is a prime example of a film in which all of the elements come together to complement and heighten the others. Whether you’re a stickler for a smart script, love a good performance piece or adore the more technical aspects of filmmaking, you are guaranteed to find something of extraordinary value in this cinematic master stroke. Touch of Evil is a truly iconic piece of filmmaking from one of the most influential and visionary artists to ever stand either side of the camera.

The Orson Welles: Postcards from Xanadu’ season continues until 3 November at the ICA. For more info, visit ica.org.uk.