Conan the Barbarian (2011), starring Game of Thrones star Jason Momoa as the more brawn than brain warrior and Rachel Nichols as Tamara his prerequisite love interest, is a lacklustre reboot of the original 1982 Arnold Schwarzenegger classic. Conan (Momoa), is born in the midst of war, as his mother is killed during a battle whilst giving birth to him. Many years later after his father Corin (Ron Perlman) is murdered by the evil Khalar Zym (Stephen Lang), Conan embarks on a quest of bloody and barbaric vengeance.

Sword and sorcery epics have been in vogue from Hollywood’s earliest days when Douglas Fairbanks first boarded his flying carpet in The Thief of Baghdad (1924). Though never winning acclaim for their depth or relative insightfulness, those pioneering epics had a certain rough-and-ready charm. Unfortunately, the current spate of fantastical ‘sword and sandal’ re-interpretations which have recently flooded our screens – of which Conan the Barbarian is a prime example – lack any such redeeming qualities. 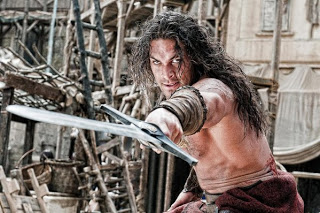 The outside scenes – shot in various regions of Bulgaria – may be beautiful, and some of the CGI cityscapes are impressively majestic. However, when the action moves to the inside of a sand barge or to the bowels of a cliff-top temple for a climatic confrontation between Conan and Zym – fighting over Tamara (Nichols), whose body Zym wishes to use as a vessel through which to channel the spirit of his dead wife (are you following this?) – it becomes increasingly hard to decipher what exactly is supposed to be going on.

Any characterisation (what there is of it) is equally indecipherable. Momoa appears to be from the acting school where a scowl from behind a curtain of long dark hair is the pinnacle of emotion (though skilled interpretation is probably not a requirement for someone who cut their teeth as a regular on Baywatch and Stargate: Atlantis).

One of the few promising narrative threads could have arisen from the ‘unnatural’ relationship between Zym and his daughter Marique (a creepy, over-the-top performance from Rose McGowan), reminiscent of that between Emperor Ming and his daughter Princess Aura in Flash Gordon (1980). However – like Conan the Barbarian as a whole – this promises an exoticism that it ultimately fails to deliver.

Read our interview with the star of Conan the Barbarian, Jason Momoa, here.