The ‘Inbetweeners’ are the four laddish sixth form mates whom we first met on three wildly popular series of the E4 sitcom, and their first big screen outing brazenly ignored historical and conventional wisdom – which deemed all sitcom-characters-go-on-holiday movies to be abject failures – and became the biggest British comedy of all time. It’s quite easy to see why: for their young adoring audience, this cinematic adaptation is a full-blown crowd-pleaser, taking familiar and much-loved characters and giving them a large-scale, churn-inducing, side-troubling send off.

The film picks up where series three left off, following the misadventures of wannabe sex pest Jay, the lovably stupid Neil (Blake Harrison), lovelorn Simon (Joe Thomas) and aloof narrator Will (Simon Bird), as they embark on an ill-advised holiday to the Brit holiday paradise of Malia on the inheritance money of Jay’s recently deceased granddad. 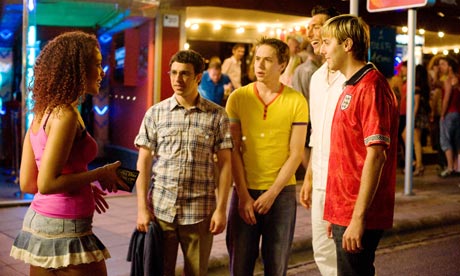 As with the sitcom, the main plot points involve the lads’ attempts, of varying success, to get their end away. And as with most holiday movies, a well-trodden arc of falling out and making up, of friends made new and old, of lessons learned, is carefully followed. It’s not devastatingly original and the final outcome is all rather implausible, but you don’t watch a film for plausibility or structure – you watch it for the funnies. And boy, does it deliver.

Taking their cue from American gross-out comedies and upping the gag density immeasurably, Beesely and Morris barely let you pause for breath. Rarely a minute goes by that a character does not humiliate himself or show a complete lack of self-awareness, for our pure entertainment. There’s a consistency to this comedy, a film that is genuinely funny from start to finish. Highlights include Jay and Neil coming face-to-face with a self-fellating male stripper; the ‘suicide shot’ – tequila with salt up the nose and lime juice in the eye; and an attempt at dancing from the boys so bad you will feel your very soul cringe.

And amid all the humiliation of our heroes it also manages to capture the zeitgeist of Britain in 2011, or at least the pocket of Britain that gets embarrassingly, paralytically pissed in a foreign land every summer, transforming whole islands in Greece and Spain into Bacardi Breezer-drenched infernos – and capturing a very British adolescence is something Beesely and Morris have always excelled at. They say this is the last Inbetweeners Movie, but with that box office take, a sequel surely in the works. And if we have seen these characters for the last time, it’s a fitting send off.