Scott (Brian Hallisay) and his three friends, Carter (Kip Pardue), Justin (John Hensley) and Mike (Skyler Stone) hit Las Vegas to celebrate Scott’s last weekend of freedom before his impending nuptials. Picking up two girls for some off-the-Strip fun, their debauched weekend becomes the holiday from Hell after they inadvertently stumble across a private member’s club where the stakes are high and there’s a lot more than dice being rolled. Will Scott and what’s left of his friends ever get to see him make it up the aisle, or are they all about to discover that their luck has just ran out (*yawn*)? 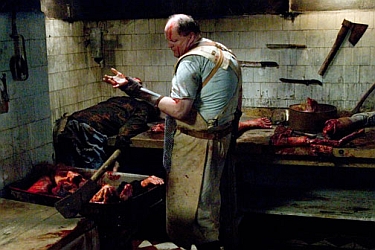 The set-piece killings are undeniably clever and dramatically pulled off (quite literally in the case of one man’s face), but where the best horror films cut away at the last moment, leaving it to the viewer’s imagination to fill in the gaps, Hostel: Part III make no pretence or allusion to such subtlety. One effective element of the film are the several ‘false starts’ at its commencement, bringing you to edge as you expect a grisly moment which never in fact materialises. However, these only serve to make the horror when it actually arrives all the worse.

If you manage to make it to the end of Hostel: Part III you’ll are rewarded (?) with an unexpected twist, but even this isn’t enough to save what is effectively a pointless and nasty exercise in blood-letting.