Snubbed at this year’s Golden Globes, yet with 11 BAFTA nomintations and three Oscar nods for Best Adapted Screenplay, Best Original Score and Best Actor for its leading star Gary Oldman, Tomas Alfredson’s Tinker Tailor Soldier Spy was undoubtably one of the finest British films of 2011. One brief look at the cast list will tell you nearly all you need to know about the film, with Oldman, Colin Firth, Tom Hardy, Benedict Cumberbatch, Mark Strong and John Hurt all on fine form in a superbly understated espionage thriller.

Set in 1970s Britain during the height of Cold War paranoia, Tinker Tailor Soldier Spy follows veteran spy George Smiley (Gary Oldman stepping into the shoes of the late Alec Guinness, who portrayed the character in the BBC series) as he is brought out of retirement to hunt and expose a mole at the top of the ‘Circus’ – the codename given to the highest echelon of British Intelligence. Among the possible suspects are former colleagues Bill Haydon (Firth), Percy Alleline (Toby Jones), Toby Esterhase (David Dencik), Roy Bland (Ciarán Hinds) and rogue ‘scalp hunter’ Ricki Tarr (a superb Hardy). Smiley’s only true ally in the investigation – after the death of former spymaster Control (Hurt) – comes in the form of the soft-spoken Peter Guillam (Cumberbatch). 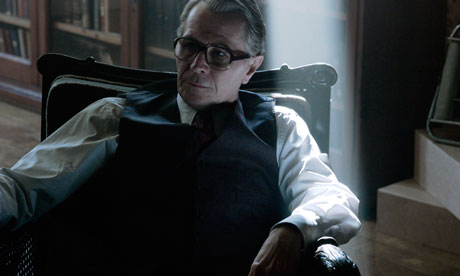 Perhaps the only big name missing in the previous lineup is the unsung hero of the piece, Mark Strong, who is superb in his multi-faceted portrayal of the crippled and betrayed former-agent Jim Prideaux. Strong has made a career out of bit parts and villain roles (including notable turns in Guy Ritchie’s Sherlock Holmes and Kick-Ass), yet here Alfredson rests the emotional core of the film on Prideaux, who is constantly nursing a number of bullet holes from a recent double-cross in Budapest, Hungary (a departure from the original text’s Czech operation).

It almost goes without saying that the rest of the cast are all superb – with the exception perhaps of Kathy Burk, if one were to be ultra-critical. Oldman is an emotive, yet reserved Smiley, perfectly embodying the ageing spy’s uncomfortable, anachronistic position in both 1970s London and the increasingly ‘ugly’ espionage trade – the iconic actor is well-deserving of his Best Actor Oscar nod. In addition, Firth, Cumberbatch and Hardy all give fine performances in their respective roles.

Perhaps the biggest success story to come out of the whole project however is director Tomas Alfredson, given the unenviable dual-task of following up his incredible Swedish vampire drama Let the Right One In (2008), whilst also – alongside British screenwriter Peter Straughan – condensing John le Carré’s complex, labyrinthine text into a shootable, coherent film narrative. With Tinker Tailor Soldier Spy, Alfredson not only succeeded in overcoming both aforementioned challenges, but also produced one of the finest films of 2011. It’s no surprise that Working Title have reportedly given the green light for Alfredson to shoot a follow up, believed to be an adaptation of Smiley’s People, with Oldman returning as the titular spymaster.