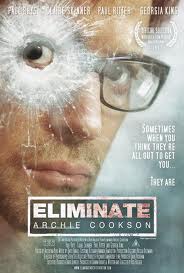 Archie Cookson (Rhys) is a clumsy and naive government linguistic spy whose penchant for red wine has steadily resulted in a decrease in the quality and content of his work. Estranged from his aristocratic wife and their incredibly intelligent son, Archie’s life is a far cry from the adventure and excitement of most movie spies. One fateful day he’s handed two mysterious tapes that just so happen to contain some highly incriminating information. His procession of these incredibly secretive tapes leaves him in a precarious position and totally out of his depth, resulting in Archie becoming a wanted man and fleeing from his one time friend, Ennis (Ritter) whilst also attempting to reconcile the numerous issues with his wife and son.

The film’s tense yet uplifting score is instantly recognisable, recalling the type of espionage thrillers which were two a penny throughout the 1970s and 80s. Coupled with the high quality of location choices and set design, this sharp and witty spy movie is notable for its assured production values – indeed debutant director Holder should be commended for avoiding the gritty kitchen-sink-drama template so often used by most aspiring British filmmakers and creating something refreshingly unique. 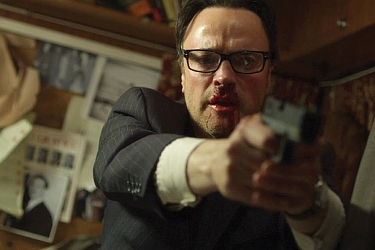 The collective performances of the film’s relatively unfamiliar cast are note perfect, especially Paul Rhys who nails the endearingly naive traits of the film’s bumbling hero. Certainly more ‘human’ than most spy parodies, Eliminate: Archie Cookson successfully balances its idiosyncratic approach and quirky dialect with an emotive core to produce a profoundly sensitive black comedy – even if the film’s delightfully jovial methods do somewhat dilute the audience’s emotional connection to the characters.

Despite seeming to have escaped the trappings of a meagre budget and limited resources there remains a few niggling touches which gently remind you that this assured debut is still a self financed, independent movie. A few continuity errors and the underdevelopment of certain narrative strands somewhat impede the film’s flow and whilst the excitement levels never dip below entertained, some of the films action scenes lack the style and panache we’ve grown accustomed to from watching the films Eliminate: Archie Cookson is attempting to emulate.

Eliminate: Archie Cookson is an incredibly well conceived and professionally executed film that’s a victim of its own success. Remarkably unique and showcasing all the technically ability of an assured British debut, the film deserves to be held up and criticised amongst the wealth of theatrical releases currently available. That said, its few teething issues hold it back from becoming the accomplished and important debut it could so easily have been. A wonderful hidden gem of a movie that will no doubt lead to director Holder being put in contention for numerous upcoming projects.