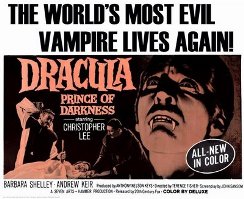 It would appear the recent rejuvenation of British studio Hammer is on a roll. Ahead of next month’s highly anticipated cinema release of their interpretation of author Susan Hill’s ghostly classic The Woman in Black (2012), the studio announced yesterday that they are to rerelease some of their most iconic films in HD Blu-ray, unleashing Christopher Lee’s Count Dracula and Peter Cushing’s Baron Frankenstein upon a new generation of film lovers.

The studio announced that they, in conjunction with key partner StudioCanal and others including Anolis Entertainment (Germany) and Pinewood, will commence a major restoration programme of their most iconic titles including such memorable gems as The Legend of the 7 Golden Vampires (1974) and the vintage 1966 occult classic The Witches starring Joan Fontaine. However, it will be the release of definitive versions of their 1950’s Gothic trio, The Curse of Frankenstein (1957), Horror of Dracula (1958) and The Mummy (1959) – which made stars of Lee and Cushing and put Hammer on the map – that will be most eagerly anticipated by fans. As well as restored HD picture and sound, the Blu-rays will have a plethora of extras including newly filmed interviews with surviving cast members. 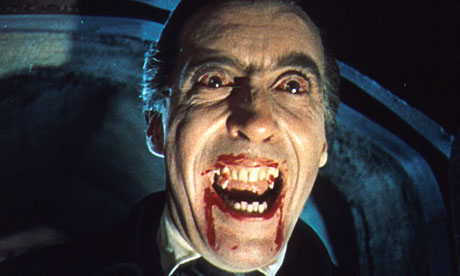 The Blu-ray releases commence in March with one of Hammer’s best loved vampire titles Dracula: Prince of Darkness (1966) (with restored UK title cards). This will be followed by their Cornish duo The Reptile (1966) and The Plague of the Zombies (1966) (complete with it’s original UK title sequence), with The Devil Rides Out (1968), Rasputin: The Mad Monk (1966) and The Mummy’s Shroud (1967) over the remainder of the year.

Simon Oakes, the President and CEO of Hammer said, “We have a busy year ahead but are confident that our Blu-ray plans will ensure that Hammer’s legacy will live on for generations to come”. Fans and newcomers alike will wait with bated breath to see if this is the case, and whether the studio which gave audiences Technicolour gore can indeed be resurrected once more.

Follow Hammer’s Restoration Blog, which will give a unique insider’s view on the entire process from material selection right the way through to release, at: blog.hammerfilms.com.