Justin Timberlake and Amanda Seyfried lead a very handsome ensemble cast in Andrew Niccol’s film In Time (2011), released now on triple play DVD. Niccol wrote Peter Weir’s The Truman Show (1998) and made his directorial debut with the oft-forgotten Gattaca (1997), both clever examples of modern science fiction. In Gattaca, Ethan Hawke struggled against a world of genetically perfect people; in In Time, Timberlake takes on a system whereby everyone stops ageing at 25, and then uses their time as currency. If you run out of time, you die.

Timberlake plays Will Salas, a guy who lives from day to day, who is gifted with over a hundred years by Henry Hamilton (Matt Bomer). He is followed by a policeman (known as ‘Timekeepers’) Raymond Leon (Cillian Murphy) to the home of Philippe Weis (Vincent Kartheiser). Will ends up on the run with Weis’s daughter, Sylvia (Amanda Seyfried).

It may seem very much as though In Time’s premise is a simple extrapolation of the common saying ‘Time is money’, a phrase generally associated with a particular type of brash, wealthy businessman; the kind of person who has plenty of both. Niccol’s astute take on the phrase is to realise that the people who have the least of the latter also have the least of the former. In Time has a lot to say on the subject of wealth distribution, and what with the youth support of the Occupy movement last year, you’d have thought it might do rather better than the somewhat modest business it did at the box office. 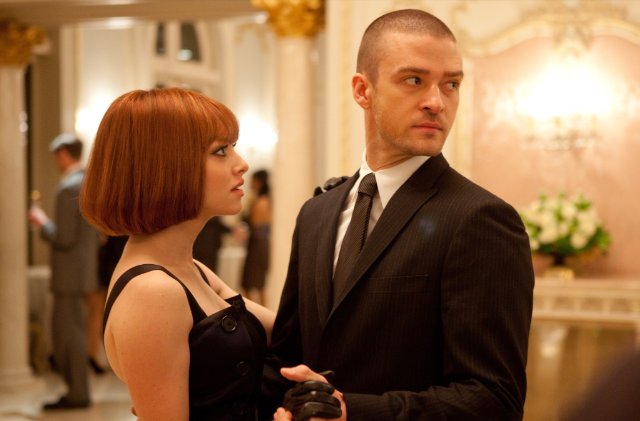 Smart and well-intentioned as In Time is, it is hamstrung by a number of small issues, all contributing to the film’s not-quite-there-ness. Primarily among these is Niccol’s dialogue. For most of the film, it’s fine and goes unnoticed, especially early on – but when In Time slips into action-thriller mode, the writer-director cannot help himself but pepper the script with far too many clichéd sub-Bond time-based one-liners.

There are also perhaps too many characters: with three villains, inevitably one or more get the short straw. Between Cillian Murphy’s conflicted Timekeeper, Vincent Kartheiser’s conceited millionaire banker, and Alex Pettyfer’s debonair thug, Murphy’s is the character most underserved. Pettyfer has never been particularly convincing in the role of protagonist, but as the vile, arrogant Fortis, he fits the part. The climax of his rivalry with Will is a unique showdown in cinema that I won’t spoil here. There are also a whole host of minor sidekicks and supporting roles who have little import when it comes to the narrative.

It’s certainly not a classic, but In Time may eventually come to achieve a respectable standing as an underappreciated film. An action film with a social conscience is a rarity, and one that deserves respect. Most importantly, even when the idea-driven narrative gives way to a Bonnie and Clyde-meets-Robin Hood combo, the film retains a sense of adventure and fun that prevents the social message from overpowering the narrative.