For those acquainted with the secretly R-rated, PG-lacquered wording of Kristen Stewart’s Bella Swan in the dreaded Twilight series; brace yourselves for her thoroughly soapless mouth in Jake Scott’s indie effort Welcome to the Rileys (2010).

Stewart plays a young, feisty but damaged stripper who meets an innocent, but unhappily married man in the form of James Gandolfini’s Doug Riley, a typical Gandolfini-esque figure of low confidence combined with high morale. Yet the hot young thing throwing herself at him (albeit, for money so she can pay her bills and have running water and electricity in her dank New Orleans apartment) is of no sexual interest to him. 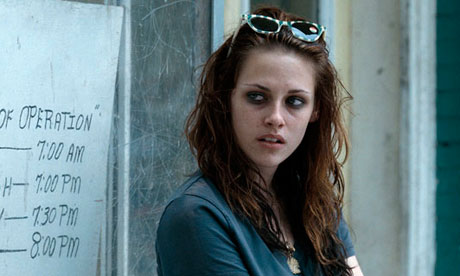 Similar to his character in 2005’s Romance and Cigarettes, Doug is flawed in his flailing masculinity and once again dominated by the females surrounding him. He has succumbed to a sordid and emotionless affair with a work colleague that has, like his marriage, become speechless and routine.

The relationship that ensues between the mid-life crisis sufferer and stripper is one healing the deep scars left by losing his daughter. Though created with sentiment and explanation, Gandolfini’s character is still tinged with dark and seedy connotations – he’s betraying his wife (Melissa Leo) and still spending most of his newfound time alone with a beautiful and vulnerable young girl. When Doug doesn’t start copulating with a scantily-dressed Stewart, but instead lingers around trying to look after her, you only feel more sorry and confused by the man.

Remaining woefully silent, Gandolfini struggles to break out of the mould The Sopranos et al. carved for the actor, and though this is an engaging enough story, it’s a shame to see him carrying out a routine as comfortable and rutted as his life in Welcome to the Rileys. Stewart’s performance is notably less lazy than usual, but she still doesn’t nail that cold sense of vacancy. Well-written and beautifully shot, Scott Jr’s film is slightly self-serious about a story that doesn’t entirely convince, but an altogether must-have for anyone that liked… anything with James Gandolfini in it.