Otto Preminger’s film noir masterpiece Laura (1944) opens with the ominous line “I shall never forget the weekend Laura died”. From there we meet hardboiled NYPD detective Mark McPherson (Dana Andrews) in a stylish New York apartment and observe his interview with the waspish Waldo Lydecker (Clifton Webb). This ageing aristocrat/journalist shamelessly types his newspaper column from his bathtub as he answers McPherson’s questions about his murdered protégé and close companion Laura Hunt (Gene Tierney).

McPherson is told that before Laura was brutally shot she used to be a famous advertising executive who was adored by everybody she met. Every person he speaks to during the course of the investigation is emphatic about her beauty, intelligence, success, and charm. Yet each suspect remains reluctant to speak entirely candidly to McPherson. Laura’s maid Bessie (Dorothy Adams) describes her mistress as sweet-natured and hard-working but clearly resents this breach of Laura’s privacy. Laura’s fiance and colleague, the suave and handsome young Shelby Carpenter (Vincent Price), is courteous to the point of insincerity, and the initial concern demonstrated by Laura’s wealthy aunt Ann Treadwell (Judith Anderson) is soon questioned when McPherson digs deeper. 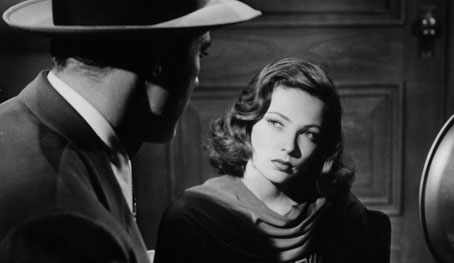 As the smooth-voiced, sharp suited detective examines Laura’s violent and mysterious demise he is lead into a glamorous but dangerous world of obsession, jealousy, and betrayal, where secrets are revealed and nothing is as it appears. McPherson gradually becomes consumed by a damaging, all-consuming infatuation for the murdered woman, he falls in love with an idea of her that is represented by a portrait of her likeness hanging above the fireplace.

Based on Vera Caspary’s novel Laura, Preminger’s sparkling, suspenseful adaptation has more than stood the test of time. The film is well served by a sharp script and fine performances by the main cast. Tierney in particular shines in the glimpses we see of Laura, and it is a sensitive and intelligent interpretation that helps prevent the character from becoming just a one-dimensional object of desire.

Another highlight is the battle of wits between the flamboyant, egotistical Lydecker and the moody, introspective McPherson. Their conflict manifests as a clash of verbal styles, Lydecker’s elaborate quips and scathing commentary contrasting humorously with McPherson’s bluntness and wry put-downs.

Preminger skilfully builds an atmosphere of uneasy intrigue with the fluid, probing nature of the camera and by using high contrast chiaroscuro lighting .This stylised palette of darkness and light works as a visual metaphor for the secrets and lies within the story, where the deep shadows represent all that is hidden and soon to be revealed. This is also emphasised in David Raksin’s theme song, which soars and swells with unspoken desire. It is a leitmotif with intricate variations, gradually changing from a beautiful and haunting melody to something significantly more aggressive and sinister.

Laura is ultimately an exploration of human psychology wrapped in a murder mystery plot. Its twists and turns certainly make it gripping first time around. The film’s real strength though lies in the fact that it is also endlessly re-watchable and continues to be extremely rewarding with repeated viewing.