Boasting an ensemble cast which includes Uma Thurman, Christina Ricci, Kristin Scott Thomas and Robert Pattinson, Declan Donnellan and Nick Omerod’s Bel Ami (2012) attempts to combine the sumptuous settings and period sensibilities of Guy de Maupassant’s original novel with a slice of contemporary drama – sadly culminating in an abysmal experiment that lacks any of the lavish charm of it source material.

Set in turn-of-the-century Paris, Bel Ami chronicles Georges Duroy’s (Pattinson) ascent from an impoverished ex-soldier to perhaps the most successful man in France. After a chance encounter with an old army college, Georges finds himself working for a prestigious Parisian newspaper. Whilst his prowess with the pen may lack the verbose approach of his contemporaries, his ability to manipulate the wives of these powerful men soon sees him at the pinnacle of this socioeconomic ladder – with his powers of seduction leaving a trail of destruction and heartbreak behind him.

Bel Ami’s cumbersome script constantly struggles to find the right balance between its twin themes of politics and seduction, often findings itself succumbing too easily to its passionate side. Perhaps most grating is the film’s indecision regarding its period setting. When choosing to create an English language drama in an European environment you, have to decide early on if your cast will recreate the accents of their characters or remain merely stars depicting a story in a foreign location through their mother tongue. Constantly flitting between the two does little more than instill the belief that the filmmakers are uncomfortable with their subject material – something that becomes more apparent as the film progresses. 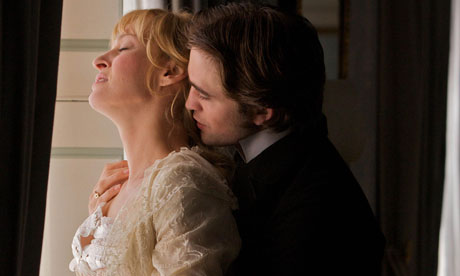 Bel Ami also constantly teases the viewer with intriguing subplots that threaten to expose the gulf of the wealth divide, the political sway of journalism and the power of sex within a relationship, before quickly disregarding it all in favour of amplified melodrama and cheap dramatic thrills fuelled by soft – often hilarious – eroticism. These brief forays into issues of media integrity and the political corruption which often accompanies warfare seem like an attempt to give Bel Ami’s clumsy tale of debauchery more gravitas than its licentious facade would have you believe – sadly it only magnifies the film’s charmless plot and its numerous short-comings.

Understandably Robert Pattinson’s performance has found itself under the unapologetic glare of many film critics, and whilst his mechanical transfiguration between one emotion to the next is often painful to watch (showcasing exactly why his cold vacant appearance in front of the camera has made him such a successful vampiric anti-hero), it’s only as terrible as the appalling calibre of acting which surrounds him – in some cases from the kind of screen stalwarts who we’d expect much better from. Notably, Scott Thomas produces one of the worst star turns, turning her interpretation of the vulnerable Madame Rousset into the type of exaggerated, lusty portrayal of physical addiction that would be better suited to a Carry On film.

Apart from its visually aesthetic production design, there’s almost nothing about Bel Ami which doesn’t feel contrived and artificial – a cheap and utterly pointless romp that descends into absurdity at an alarming rate.