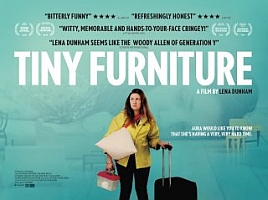 Written, directed and starring Lena Dunham, Tiny Furniture (2010) is a delightfully twee, existential comedy which takes a wildly imaginative approach to romance, family and the confusion which surrounds graduating. Also starring Dunham’s own mother and sister, and shot within their family home, Tiny Furniture is a prime example of micro budget filmmaking at its very best.

Aura (Lena Dunham) is a 22-year-old young woman suffering from post graduate delirium, who’s begrudgingly forced into returning home from university to live with her artist mother (Laurie Simmons) and overachieving sister (Grace Dunham). Recently heartbroken after her long term boyfriend (described by Aura’s condescending sister as little more than “a speck of granola” in the breakfast of life) has returned to Ohio to ‘find himself’, Aura begins the long and tricky process of deciding which path her life should take, attempting to find something which defines her, whilst simultaneously dealing with the same domestic conflicts which were apparent before she left. 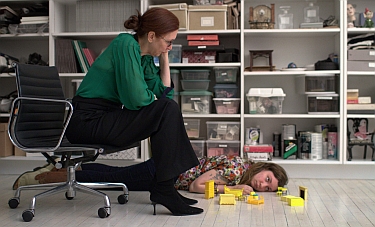 Dunham’s movie is very much about the complex relationships between women, however, it’s the traits of these deeply self obsessed characters and the audiences reactions to them which dictates the viewer’s overall enjoyment of the film. Much like a Noah Baumbach film, the movie feeds of its character’s passive aggressive conversations – with each of Dunham’s cast perfectly happy to talk and express themselves, but with no one seemingly interested in listening back – each projecting their own detestable sense of self entitlement.

Tiny Furniture’s unabashed and unflatteringly honest approach can seem a little too contrived with the conversations between the characters on screen often feeling like a competition as to who can implant the most cultural references into a sentence whilst simultaneously using the fewest monosyllabic words – an insurmountable obstacle for many, but for fans of such calculated dramas it’s a minefield of deeply detestable characters in which to lose yourself in.

The film’s most remarkable element though has to be the assured and stylish way in which it has been filmed. Dunham subtly embeds us into this bizarrely open family dynamic through some intelligent camera work. At times almost feeling like a documentary, Dunham’s use of a static camera shots successfully detaches us from the world and pulls us into Aura’s, a technique which dilutes the irritation evoked from the film’s script, and directs this anguish towards the film’s characters and less towards the filmmaker – brilliantly infuriating the audience in such a way it becomes perversely enjoyable.

At times a little too gratingly try-hard, yet on a whole a thoroughly enjoyable domestic drama, Tiny Furniture, thanks primarily to its tight and delightfully twee script, successfully comes across as the assured and intelligent film it is – marking Dunham out as a young director well worth watching out for.