Disneynature’s latest film African Cats (2011) attempts to capture the magic and wonder which made March of the Penguins (2005) such a resounding success. Narrated by Sir Patrick Stewart (previously Samuel Jackson for the US release – it still remains unknown as to whether this switch was to make the film more palatable to a UK audience or because of how critically panned Jackson’s original recitation was) African Cats combines cutting edge wildlife documentary techniques with a dramatic storyline that’s quintessentially Disney.

Focusing on two species coexisting in the Masai Mara National Reserve in Kenya, African Cats follows the stories of two feuding lion tribes and a cheetah attempting to raise her cubs in this unforgiving terrain. The lions are locked in a territorial war, with two arch nemeses (Fang, an elderly protector of a close knit pride and the unfortunately named Kali – the film’s malevolent villain) both intent on laying claim to the reserves numerous lionesses. Our single mother cheetah is named Sita and her story is perhaps the most engaging – trying her hardest to protect, feed and teach her five rambunctious cubs from the perilous wildness and its assortment of vicious predators. 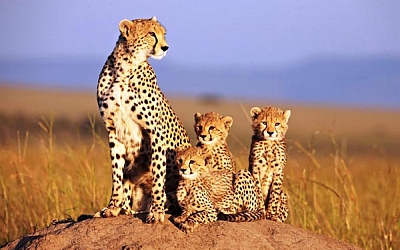 African Cats’ child friendly narrative dilutes the film’s feline cast’s carnivorous activities to a collection of tense but ultimately timid action sequences. However, despite this lack of bloodshed the film remains an emotional draining experience – manipulating the audience to the point of tears on numerous occasions. Combine this tentative approach with the type of state-of-the-art, crystal clear wildlife documentary techniques you’d expect from the creators of Planet Earth and Blue Planet and you have sumptuously presented, cohesive piece of work.

However there are times when the film’s anthropomorphism of its cast can result it some truly dire set pieces. In an attempt to give the story an added sense of gravitas the one dimensional characterisation of these wild cats can become hilarious – especially Kali, who might as well have been introduced using the Imperial March theme from Star Wars (1977). Where the film works best is in the stripped down but far more affecting story of Sita and her perilous journey bringing up her endangered cubs. Using a far more familiar and less convoluted approach the genuine empathy felt towards this struggling mother is as equally heartbreaking as it is awe inspiring.

Caught somewhere between the magical realm of Disney and the fascinating evolution of nature African Cats’ simplistic view of the African outback is far more dramatic and emotionally engaging than it is education. That said it remains a mesmerising montage or breathtaking visuals which will engage a wide audience.