Critics the world over will be scratching their heads and shaking nervously as they ponder their write-up of Marvel’s Avengers Assemble (2012) (previously titled The Avengers). Following an average set of trailers and a suspiciously low-key viral marketing campaign, only chronic liars and eternal optimists will claim they saw this coming. Not only is Avengers Assemble the best comic book adaptation to date, but also arguably one of the greatest action adventure blockbusters in cinema history, up there with the likes of Star Wars (1977), Raiders of the Lost Ark (1981) and Ghostbusters (1984).

High praise indeed, but in one fell swoop director Joss Whedon has not only reinvigorated the Marvel comic movie franchise, but also thrown down the gauntlet at Christopher Nolan’s feet. The unstoppable juggernaut that is Nolan’s The Dark Knight Rises (2012) might be destined for greatness, but it will have to be truly exceptional to better this take on the Earth’s Mightiest Heroes. 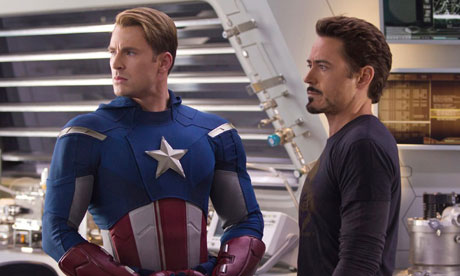 The balancing act Whedon has pulled off is nothing short of awe-inspiring. As both screenwriter and director, he has brought together a bunch of iconic characters and created a film in which they shine not only as individuals, but also dazzle as part of the Avengers team. Fears that this would be the Iron Man show are quickly diminished. Robert Downey Jr.’s effortlessly charismatic Tony Stark is at the centre of the action, but as any avid reader of the comics will tell you, Iron Man and Captain America are the team’s prominent characters and their turbulent relationship is at the heart of most of the film’s best moments.

Some critics will say Chris Evans’ that Captain America is over-shadowed by Downey Jr.’s Iron Man, but they would be missing the point. Iron Man is the wise-cracking millionaire playboy and Cap is the steady-boy scout soldier, with Evans underplaying the role perfectly despite his ridiculous costume. All the heroes are great with perhaps the exception of Samuel L Jackson’s Nick Fury, but it’s more a case of Jackson doing a good job with a fairly weak character. Chris Hemsworth’s Thor, Jeremy Renner’s Hawkeye and Scarlett Johansson’s Black Widow all get some fabulous scenes and Tom Hiddleston is suitably impish and evil as main antagonist Loki, yet it’s Mark Ruffalo’s Hulk/Bruce Banner that really steals the show. The Eric Bana/Edward Norton angry, mindless versions of the jolly green giant pale in comparison – finally we have a Hulk we can all get behind.

Whedon’s masterful Avengers Assemble deserves an essay, and no short review could ever do it justice, but if you’re in the market for one of the most wondrous and entertaining cinematic experience you could ever hope to have, book your tickets, buy your popcorn and prepare to be amazed.

Enjoy the Iron Man slots game over at betfaircasino.com to relive the excitement of the Avengers.