There has already been a great deal of praise for writer/director Joss Whedon’s handling of the epic Marvel mash-up Avengers Assemble (2012), and it’s easy to see why. Drawing together a group of impressive Marvel heroes – most of whom have had their own film(s) over the past five years – is no easy task, especially if you are also trying to appeal to a bigger market than simply comic book geeks. Thankfully, Whedon has successfully achieved this feat with humour, action and sheer spectacle.

Banished god of Asgaard, Loki (Tom Hiddleston), has come to earth in order to rain down terror with the aid of an incredible powerful artefact, the Tesseract, which will allow him to open a portal for an invading alien race. Fortunately, the steely mind of S.H.I.E.L.D. agent Nick Fury (Samuel Jackson) has a plan to bring together Earth’s Mightiest Heroes, including Iron Man (Robert Downey Jr.), Thor (Chris Hemsworth), Captain America (Chris Evans), The Hulk (Mark Ruffalo), Black Widow (Scarlett Johansson) and Hawkeye (Jeremy Renner), in order to thwart Loki’s evil master plan. The problem is that heroes have big egos and they don’t always play nice – but will they finally come together to save (or avenge) the Earth? 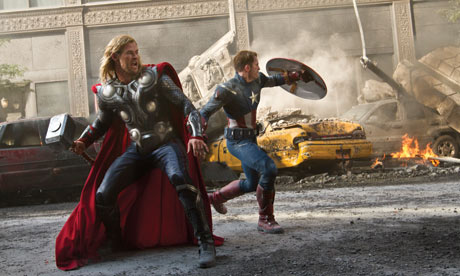 Central to the success of this Hollywood blockbuster is its sheer simplicity. Whedon might be a self-confessed comic book geek of epic proportions (sometimes it isn’t good to get what you want) but the real reason he was brought in is that he understands characters, a fact demonstrated in the much underrated Firefly, it’s big-screen spin-off Serenity (2005) and of course Buffy the Vampire Slayer.

Understanding characters means that he understands what makes for a tremendously enjoyable film, jam-packed with heroes that millions know and love. Perhaps most satisfying of all is the way Whedon has crafted the definitive Bruce Banner/Hulk character, expertly portrayed by Ruffalo (with the help of ILM motion capture), who does well to bounce off the playboy wit of Downey Jr.’s Tony Stark.

The action in Avengers Assemble is simply breathtaking. The final action scene, which runs for over half-an-hour, is awe-inspiring in its proportions, with audiences able to witness Manhattan brought to its knees as the half-dozen heroes desperately fight to save it. These impressive final scenes, along with some fantastic comic moments as the heroes squabble in the way only superheroes can, make for a great popcorn action film.

Avengers Assemble is neither hugely sophisticated nor subtle, but is all the better for it. This is a back-to-basics, purist’s action movie that should leave audiences fully satisfied, something that none of the previous Marvel films has ever truly achieved. Make sure you also stay in your seats for a mouth-watering post-credits surprise.