One of the surprise hits at last year’s BFI London Film Festival, Morten Tyldum‘s Norwegian thriller Headhunters (2011) enjoys an unlikely but deserved UK release this week, in keeping with our country’s current affection for Scandinavian fiction. Adapted from Jo Nesbø’s novel of the same name, Tyldum‘s film is a twisty, unpredictable and darkly funny tale that’s certainly worth your time.

Like any crime thriller worth its salt, there is a dual meaning to the title. Roger Brown (Askel Hennie) feigns a life as a corporate headhunter, recruiting potential businessmen for wealthy potential clients – a nifty means by which to scout out expensive paintings for his lucrative art theft operations. Roger is charming, experienced, and meticulous, and sales of his stolen paintings on the black market afford him endless riches, sharp suits, a luxurious Oslo mansion and a hot wife (Synnøve Macody Lund). But when he stumbles upon a painting which could set him for life – a “one last job”, then – he quickly finds himself head-hunted in the non-corporate, more murderous sense.

Headhunters is a terrific adaptation, never feeling too bogged down with the trappings of the burdensome source. Only occasionally does the plot seem a little jumbled, most notably towards the conclusion when some loose ends have to be tied up, and even then you suspect some elements would be easier to grasp with a command of the Norwegian language. 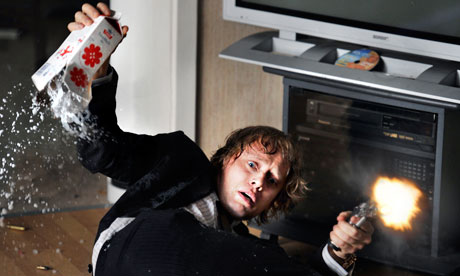 But for the most part it zips along, masterfully paced with action that snowballs with jaw-dropping, seat-edging progression. Things go rapidly from great to bad to worse: as Roger is ruthlessly hunted by dashing bad guy Clas (Nikolaj Coster-Waldau), events become increasingly (and enjoyably) harder to predict. Who is double-crossing Roger? Can his wife be trusted? Who is Clas, and what is his past? These questions keep you guessing, and engrossed.

Headhunters is also unexpectedly and frequently hilarious, a heaped spoonful of black humour dolloped throughout. Two stand-out sequences in particular will sit uneasily in your memory long after the cinema lights have come back up: a toe-curling moment with a blunt razor, apparently performed for real, and a gross-out scene involving a herculean amount of faeces which will prove hard to scrub from the memory.

Roger Brown is a tricky leading man, who has already proved divisive among audiences. A true anti-hero, he’s deeply unlikeable from the off – greedy, manipulative and utterly self-absorbed. He is hard to love. But this gives his ultimate grisly redemption a rich and complex schadenfreude. Roger is played with determined skill and commitment by the superb Hennie, whose goggle-eyed Willem Defoe/Steve Buscemi-esque features affords him an slender undercurrent of derangement and just the right pitch of wild desperation.

With such a distasteful leading character, Headhunters will not be for everyone. But it ought to be. Ultimately, it’s a fantastically entertaining piece of cinema, of the cloth that Hollywood seems to have largely forgotten about. Catch it before Hollywood’s inevitable English-language remake (Mark Wahlberg is apparently interested) does an inevitably inferior job.