On the second day of the 14th Udine Far East Film Festival in Italy, CUEAFS member Antoniya Petkova had the distinct pleasure of talking with renowned South Korean director Hyeong-Cheol Kang and producer Han-na Lee, both in town to promote the opening night screening film of their latest effort Sunny (2011).

CUEAFS: Sunny did very well in the South Korean box office, out-grossing expensive Korean films such as My Way (2011) and The Front Line (2011). How do you feel it was perceived by an international audience during its Udine premiere?

Hyeong-Cheol Kang: At first, I was a bit concerned whether this audience will perceive the film in the same way as the Korean audience did, mainly because of the emotional differences and cultural background. But at the end, I think people really enjoyed Sunny, probably because the film is based on the common thing in our lives, nostalgia.

CUEAFS: Do you think this is the one aspect of the film that makes it so transferable? 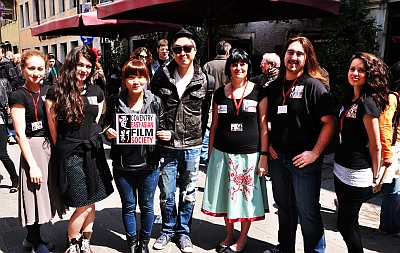 CUEAFS: The film is inspired by your mother, isn’t it?

H-C K: The film is not based on her life, but when I was working on my new project I looked at an old picture of my mother when she used to be very young, and I thought that she must have had a very interesting life, like I did.

CUEAFS: A running theme throughout the film is the process of growing up and the meeting with conflicts and difficulties. Is this something you two share – is it something based on your own personal experiences?

Han-na Lee: When I was developing the film, I could see my story in the characters. After seeing the film, many people loved it because they managed to find their own personal story in it. I think that everyone can find their own story reflected in each of the characters – some people found they are like Na-Mi or they are like Chun-hwa. I was quite small , so I personally think I looked like Na-mi when I was young.

CUEAFS: The film shows that different generations, whilst far apart in aspects, are at the same time very similar. Is this something you were trying to convey?

H-C K: Yes, there are of course differences between these two generations mainly because of the developments and changes in the society. But at the same time, through the story of Na-Mi when she was young and the story of her own daughter (for example, when they were going to school and the mother was rushing to feed them), I wanted to imply that the relationship between a mother and a daughter never changes.

CUEAFS: I am curious about the music in this film as well, as the music in your previous film, Scandal Makers (2008). There is a lot of music, especially retro music – do they hold any specific significance, for example Sunny and Walking on Sunshine? 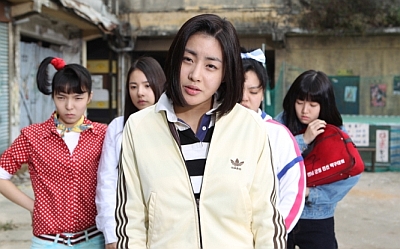 H-C K: I personally like music very much. For Scandal Makers in particular, I wanted to choose more upbeat music that will reflect the scene where the characters reconcile, so I chose Walking on Sunshine. For Sunny, I wanted to choose music that will reflect and describe the main emotion and atmosphere of the film. Music is one of the main characters in the film. ‘Sunny’ is as well one of the key words of the film so that is why I chose it for the ending. Through this song, I wanted to show that even though they are old now, when they are all together with their friends they are young in their hearts.

CUEAFS: It’s quite strange that you selected western songs. Were they both popular songs in Korea at the times both films were made?

H-C K: In the 1980s in Korea, western music was very popular, so they these songs were a useful tool to recreate the atmosphere at that time.

CUEAFS: Was Sunny influenced by the revival of 1980s music and style in contemporary South Korean culture?

H L: It was more of a lucky coincidence that there was a retro boom when we were releasing the film in 2010. The project was actually developed 10 years ago, so it was very lucky to have that kind of environment to release our film in. We just wanted to create a story about life, so we just thought of our own childhood memories.

CUEAFS: Do you two have any projects that we can are be looking forward to?

H L: We are only in script stage right now, but we are working together on a third project at the moment that is actually the sequel to a very popular film, Tazza: The High Rollers (2006).