Easily one of the most eagerly-anticipated films to feature in this year’s inaugural Sundance London festival programme was the National Geographic-funded documentary Chasing Ice (2012). Director Jeff Orlowski has painstakingly created a fascinating and powerful movie about climate change by presenting the audience with the globally important work of photographer James Balog and his Extreme Ice Survey Project – a film so eye-opening and socially important that it demands to be seen. Acclaimed wildlife photographer James Balog openly admits he (like many of us) used to be ‘sceptical’ about global warming.

However,  Balog’s viewpoint changed dramatically when learning about ice core research. Despite attracting his attention to the man-made effects on the climate he still found it difficult to connect with scientific number crunching and attempted to use his skills of photography to capture some tangible proof of the devastating effects our carbon powered society is impacting onto the environment. Orlowski’s documentary follows Balog as he set about positioning numerous static cameras around the glaciers of Alaska, Iceland and Greenland in order to use revolutionary time lapse photography to capture the true extend of the glacier recession as they disappear at an astounding rate. 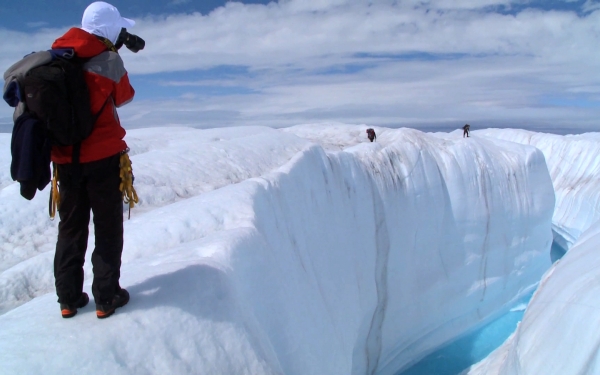 Even taken out of context the rich imagery presented through Balog’s striking photography would be enough to truly mesmerise any audience. Capturing the never-ending variations and endless beauty of the ice, Balog’s imagery wonderfully encapsulates the fragility of nature whilst simultaneously presenting us with its awe-inspiring scope and majesty. However, combine these sumptuous visuals with a profoundly devastating message about the changing face of the earth and you have a truly effective documentary commendable for never patronising or blinding the audience with science – as the saying goes a picture can tell a thousand words. Yet behind the film’s powerful message lies a fascinating story.

Balog is an immensely watchable individual, admirable for his drive, ambition and being constantly in awe of the nature which surrounds him. Clearly passionate for the project he’s invested so much time into it’s almost heartbreaking to see his despair when faced with the numerous obstacles this ambitious project encountered. Literally working to the bone (he’s had to go under the knife numerous times for a recurring knee injury) his commitment to stopping the argument surrounding global warming and promoting action through his artistic talents is truly heroic.

Whilst An Inconvenient Truth (2006) may have been the film to push climate change into the public consciousness, Chasing Ice with its evocative and simplistic message will hopefully be the film to herald a much needed change in direction and promote some decisive action. Chasing Ice is a magical, yet horrifying film which both astounds and enlightens in equal measure.