A film festival wouldn’t be a film festival without Chinese director Lou Ye. Ye’s been a regular feature at the Cannes Film Festival countless times and only last September was premiering his French language film Love and Bruises (2011), starring none other than A Prophet (Un Prophète, 2009) star Tahar Rahim. A down-at-heel drama, the film didn’t make it out of the festival circuit, but his new thriller Mystery (2012), which has just opened the Un Certain Regard section, seems more likely to appeal to wider audiences. 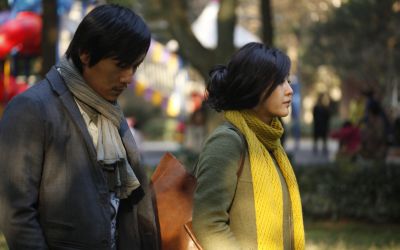 His fourth film in competition at Cannes – the others being Purple Butterfly (2003), Summer Palace (2006) and Spring Fever (2009) – Lou Ye’s Mystery begins uncharacteristically with cars speeding through a torrential downpour, as a bunch of spoilt rich kids irresponsibly race each other. Coming out of a tunnel, they spot too late a girl standing in the road, hitting and killing her. Was it a pure accident, a case of reckless driving? Or was this mysterious stranger trying to perpetrate some form of scam that went wrong?

Ye allows the narrative to open up slowly, revealing unexpected levels of depth as a wife in an apparently unrelated story becomes ever more relevant upon discovering that her successful and apparently perfect husband might have been leading a double life – and the dead girl may have been involved.

Starring Hao Lei, Hao Quin and Qi Xi, Mystery explores notions of fidelity, family and identity, as well as sexual attraction. There is something Jacobean in its meticulous intrigue and double-crossing, but the blood-letting is relatively restrained. There is also a portrayal of contemporary Chinese society which is at once corrupt and self-serving, and yet with honourable exceptions. The young rich kids who are able to ‘literally’ get away with murder are only part of a system that, with the nation’s growing wealth, seems to have lost its moral bearings.