The Oedipus complex has long fascinated and inspired artists and Hungarian writer/director Benedek Fliegauf is the latest filmmaker to tackle the subject in his first English language picture Clone (Womb, 2010). French actress Eva Green plays Rebecca, a young woman who returns home from Japan to rekindle a relationship with her childhood sweetheart Tommy (Doctor Who’s Matt Smith). However, after only a few days together, Tommy is killed in a traffic accident as he and Rebecca are on the way to a political rally.

Traumatised by the incident and stricken with grief, Rebecca makes the rash decision to clone Tommy in order to bring him back to life – the twist being that in order to do so she must offer to be impregnated with Tommy’s clone’s embryo and eventually give birth to him. It’s a bizarre plot, and many viewers may well have difficultly investing themselves in such a far-fetched concept, but with enough skill a good director can sell you even the most preposterous of premises. Whilst Fliegauf is certainly stylistically astute and his camera work and taste in locations is of the highest quality, his script doesn’t quite match his technical prowess. 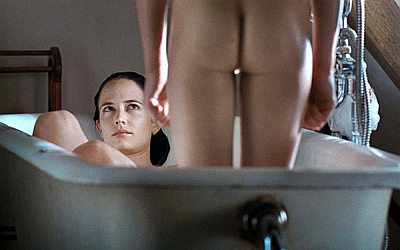 It’s difficult to put you finger on exactly why Clone doesn’t quite work. Yes, things move at a snail like pace and 1 hour 47 minutes of uneventful bleakness is not popcorn munching material, but in comparison to some arthouse exponents of slow cinema, this is a high octane rollercoaster ride.

Some critics have questioned Rebecca’s motivation for wanting to give birth to her dead boyfriend’s clone (when it’s spelt out like that it’s difficult not to chuckle). Yet, although it seems like an absurd thing to do, it’s worth remembering that she did see her long lost love’s body splattered all over the road. This is not a woman of sound mind, and although Fliegauf hints at this, his biggest flaw is his subtlety. As for Green, the camera clearly adores her and this is a timely reminder that she is a talent who’s best days are ahead of her. Smith also does a fine job, but it has to be said that the spectre of Doctor Who looms large in certain scenes.

Overall, Clone is an interesting and thoroughly well-made high concept sci-fi. Whilst there have been cries from some quarters condemning it for it’s incest references, these are tastefully-handled and pale in comparison to the likes of Ma Mère (2004) and Savage Grace (2007).