British director Guy Ritchie’s first Sherlock Holmes foray in 2009 was met with criticism over its jumbled plot and reductive take on Holmes’ character, yet Ritchie has since upped his game with the sequel, Sherlock Holmes: A Game of Shadows (2011). Leads Robert Downey Jr. and Jude Law continue to share some believable chemistry that serves as a platform for droll one-liners and witty banter between the pair, whilst the plot gallops along for over two hours without quite stumbling into stagnant waters.

The straight-laced John Watson (Law) is getting married in the morning, which is apparently news to best man and supposed organiser of the stag do, Sherlock Holmes (Downey Jr.). The improvised evening of gambling and punch-ups serves as Holmes’ cover as he follows a lead to fortune-teller Madam Simza (Noomi Rapace, soon to star in Ridley Scott’s sci-fi epic Prometheus [2012]). Holmes is on the trail of the brilliant Professor James Moriarty (Jared Harris), who he has uncovered as the link to assassinations and terrorist attacks in France and Germany. With Simza and her gypsy pals in tow, Watson’s honeymoon is spent racing around Europe on trains and horseback (or Shetland pony-back in Holmes’ case) in the hope of foiling Moriarty’s maniacal plans. 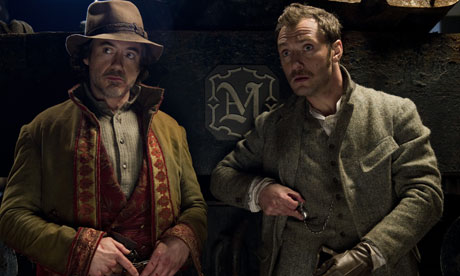 The best element of Ritchie’s inaugural Sherlock outing has been recognised and maintained for the second – the dynamism and chemistry between Downey Jr. and Law. The pair belong together in their revised roles, but herein lies quite a major problem with the film – all supporting cast members are underplayed, with even an excellent Harris in the turn of Moriarty slipping slightly into the shadows. Rapace – so watchable as Lisbeth Salander in the Millennium cycle and a dab-hand at action sequences – is then quiet and unremarkable with dialogue. The only exception to this trend is Stephen Fry’s involvement, who makes the most of his smallish part with his camped-up interpretation of Sherlock’s brother Mycroft.

When his thought processes are played out for the audience, Ritchie’s frenetic yet controlled approach to capturing Holmes’ cognition works well to highlight his complex character. Ritchie experiments with shots yet remains distinctive in style, and manages to tie the various strands together into a reasonably coherent structure. However, the film inevitably falls into the occasional plot hole and could have benefited from a tighter edit.

Whilst Ritchie’s adaptation is admittedly a superficial one that won’t fare too highly with old school Holmes enthusiasts, it succeeds in entertaining and maintains its pace with some well-written dialogue and skilfully directed action sequences. If the thought of Downey Jr. brandishing a gun in drag and a full face of make-up takes your fancy, Sherlock Holmes: A Game of Shadows is the movie for you.