Despite an influx of Sherlock Holmes adventures doing the rounds, there are none quite like revered Russian director Igor Maslennikov’s celebrated interpretations. Sherlock Holmes: The Hound of the Baskervilles (1981), his version of the Victorian detective’s encounters with a beastly dog in the wilds of Devonshire, starring Vasili Livanov, Vitali Solomin and Nikita Mihalkov, is a serious yet lively retelling of the popular tale.

After the death of Sir Charles Baskerville, his nephew Sir Henry (Mihalkov) is leaving for Devon to lay claim to his inheritance of the Baskerville estate. Due to suspicious circumstances surrounding Sir Charles’ death, the imminent detective Sherlock Holmes (Livanov) and his friend Dr Watson (Solomin) agree to accompany Sir Henry and see that no harm comes to him. Unexpectedly detained in London Holmes sends Sir Henry and Watson on ahead, promising to follow when he can. When the two men arrive at Baskerville Hall they are met with a hostile and superstitious community unwilling to welcome the new Lord of the Manor. And then there are the unearthly cries of a strange beast which haunt the surrounding moors at night. 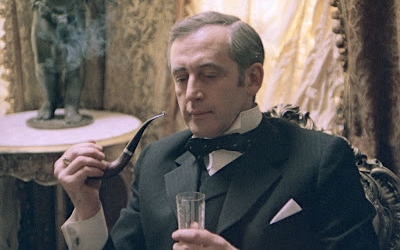 Despite its reputation for period detail, sumptuous costumes and sharp dialogue, The Hound of the Baskervilles has an inescapable eastern European air. The streets and houses of London and rural Devon have a distinctly Russian austerity, whilst the glaring placement of several red pillar boxes in the village close to Baskerville Hall (clearly to add authenticity to the settings) appear incongruous by their prominence. These aside however the evocation of England’s wild and desolate west country, particularly Sir Henry’s remote ancestral home with its baronial dinning hall surrounded by treacherous bog land, makes for a suitably feisty backdrop against which the main story plays out.

A host of eccentrics gives marvellous support, including character actress Rina Zelyonaya as Holmes’ dotty housekeeper Mrs Hudson. But it’s the three main cast members, Livanov, Solomin and Mikhalkov, who make the story come alive. After watching him you’ll understand why Livanov, a Russian by birth, was awarded a special OBE for his portrayals of the most British of fictional heroes.

A slight ponderousness adds to rather than detracts from The Hound of the Baskervilles’ appeal. This serious approach is what separates Sherlock Holmes’ adventures from other detectives stories, and has helped Igor Maslennikov’s productions, like the original tales themselves, stand the test of time.