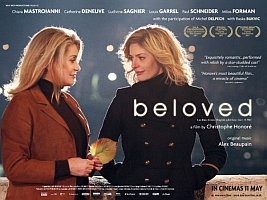 Spanning ﬁve decades and four countries,  Beloved tells the story of Madeleine (played by Sagnier in her youth and Deneuve in her latter years) and her daughter Vera (Mastroianni – Deneuve’s real life daughter). We witness the troubled relationship between Madeleine and her ﬁrst husband, whilst observing Vera as she struggles to ﬁnd love in the most unlikely of guises. The two women reminisce over the men of their lives whilst struggling to get to grips with their current romantic predicaments, encountering the same issues in the present day as they both lay witness to in the past. 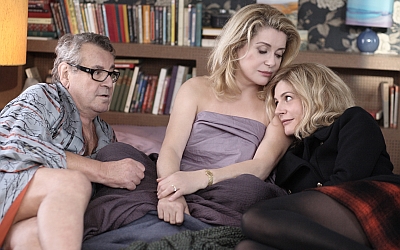 Beloved features some charming period features which beautifully intertwine with the present day through some intelligent cuts that allow the ﬁlm to skip through various generations with relative ease. Sadly, the initial vibrancy of sixties Paris is underused and Honoré’s more contemporary narrative strands lack the charm and magic of what precedes them. That said, it’s a delight to observe Deneuve and Forman as a pair of star-crossed lovers in the twilight of their lives exchange light-hearted and sexually-charged dialogue with each other, even if the storyline which frames their elderly romance lacks any dramatic punch.

At almost two-and-a-half hours in length, Honoré sadly struggles to keep its ambitious narrative truly engrossing throughout, with the ﬁlm often meandering into repetitive scenes of ﬁdelity and melodramatic set pieces fuelled on physical infatuation. Whilst commendable for its epic scope, Honoré fails to restrain each of his character’s stories and what should have been a tale of the inherent romantic failings of a mother and daughter quickly becomes a tedious collection of overlapping incidents.

The collaboration between Honoré and Beaupain, combined with a Parisian-set story of an unconventional love triangle will clearly draw parallels with 2007’s Love Songs. Whilst their previous work seamlessly slipped into song in much the same way as Jacques Demy’s delightful work in the sixties, Beloved fails to effectively merge its musical numbers with the drama that surrounds them. This culminates in a number of ill-advised musical vignettes which do little more than amplify the scripts already over used sentiment.

Despite containing all the ingredients for a ﬂamboyant Parisian globe trotting romance of errors, Beloved sadly attempts too much for its intoxicating concoction of amorous adventures to effectively resonate. Lacking in momentum and severely overworked, Honoré’s latest ﬁlm offers a glimmer of his talents, but in attempting to capture and expand upon the success of Love Songs, the director has left us with an incoherent and poorly-structured ﬁlm.