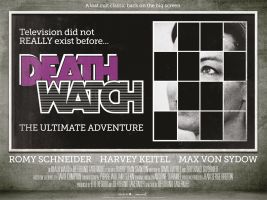 Finally given the digital restoration it so thoroughly deserves (and with the personal blessing of its director), Bertrand Tavernier’s immensely prescient sci-fi parable Death Watch (Le Mort en Direct, 1980) makes its way back into select cinemas this week courtesy of a Park Circus rerelease. An oft-forgotten cult masterpiece, the French filmmaker’s dystopian neo-noir – shot entirely on location in Scotland – presents a dark, twisted future where reality TV is the new opiate of the masses and extreme voyeurism is king – sound familiar?

In a not-too-distant future (adapted from the world of D.G. Compton’s 1974 novel The Continuous Katherine Mortenhoe), Roddy (Harvey Keitel) – a cameraman who has his recording equipment implanted into his brain – is commissioned by network producer Victor (Harry Dean Stanton) to shoot the inaugural series of ‘Death Watch’, a new reality TV show where a terminal ill patient’s arduous demise is broadcast to millions of expectant viewers. The programme’s first victim is Katherine Mortenhoe (Romy Schneider) who, after initially accepting Victor’s enticing cash pay-off, escapes her constraints to die alone in peace. Roddy is compelled to follow, whilst his unsuspecting subject blindly welcomes his companionship with open arms. 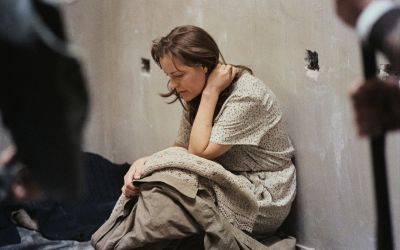 It’s often very difficult to effectively capture the essence of ‘near-future’ existence. We commonly see too large a jump in too short a timescale, with levitating cars and holographic supercomputers jarring against almost every other element of a film’s mis-en-scene. With Death Watch, Tavernier instead focuses on one little high conceptual hook – Roddy’s internal camera (created, one assumes, through nanotechnology). Through this device, the French filmmaker carefully constructs a world where natural death has become exotic and distant, social unrest is rife yet everyday (contracted protesters are referred to as ‘marchers’, kicking up a fuss for the highest bidder) and artistic creativity is now firmly in technology’s silicone grip. Katherine herself operates a machine (named ‘Harriet’) that sifts through dramatic structures and devices, highlighting there previous use – “Fuck you Harriet” is her frustrated response.

Like all of the best works of science fiction, Death Watch operates near-flawlessly as a biting satire on our times, highlighting humanity’s own cruel obsession with suffering, manipulation and greed. Nowhere is this better encapsulated than in the Stanton’s Victor, a not-altogether-unlikeable character who nevertheless is in the business of profiting from death. Tavernier also points the accusatory finger at filmmakers themselves, who after all have the capacity to misuse their camera lens to devastating effect. In one Promethean soliloquy, a repentant Roddy describes his all-seeing eye as “the toy to end all toys”.

Throw in some striking cinematography, capturing everything from Glasgow’s industrial plants to the great Scottish wastes, as well as a sweeping score, and Death Watch sets itself apart from the chasing pack. Unlike some other sci-fi directors who could be mentioned, Tavernier manages to thread through his concerns surrounding the vanishing gap between reality and artifice, whilst at the same time producing a taught, tense cat-and-mouse thriller set in an uncanny future, both familiar and alien. If you see one sci-fi film this week, make sure it’s Death Watch.