During a sold-out event on London’s Southbank, the BFI rounded off their Made in Britain season with a screening of Joanna Hogg’s 2007 debut film Unrelated. Hogg, whose previous credits include extensive TV work and the acclaimed 2010 drama Archipelago, attended a Q&A session after the screening. She also exclusively revealed some details about her next film, which is currently in production.

Despite being her first feature, Unrelated quickly established Hogg as a director whose sharp eye and ability to resist the technical conventions of Hollywood cinema has ensured her films are bursting with genuine realism, deeply influenced by the work of Eric Rhomer and Japanese filmmaker Yasujirō Ozu. The film follows forty-something Anna (Kathryn Worth), who takes a holiday to Tuscany to escape the pressures of her relationship back home. Although she stays with her oldest friend, she finds she has more in common the family’s teenage son than the ‘olds’ she should probably be hanging out with. 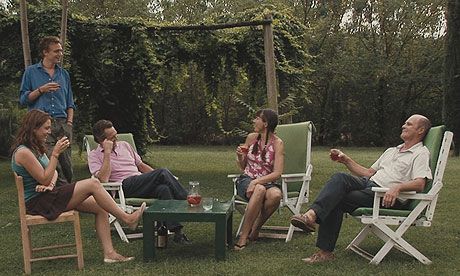 Hogg talked about the importance she places on improvisation and other Mike Leigh-esque approaches: Worth deliberately joined the rest of the cast out in Italy at a later date (as her character does in the film), Hogg attempting to recreate the figure of the outsider both on and off set. In terms of cinematography, Unrelated is full of lingering tableaux shots, the camera static, its gaze irresistibly unflinching as the cracks begin to show in what once seemed to be a halcyon domestic world.

The BFI’s Made in Britain series saw a month-long celebration of British female directors, the programme including screenings of films by Andrea Arnold, Clio Barnard and Lynne Ramsay. Though the series gave some much-deserved attention to some of our best British talent, it seems there are still plenty of hurdles in place for both aspiring female directors, and established ones like Hogg. The director spoke of the necessity to keep budgets low to produce films which tell the stories of women who are “a certain age”. There were also fervent nods from the crowd when she spoke of Hollywood’s “obsession with youth”, despite the fact that audiences are in fact eager to watch films that feature older protagonists.

Hogg’s next film will be set in London, and will follow a middle-aged couple who plan to leave the big city behind them. It may not sound like much of a departure from her usual subject matter, but if Hogg’s previous films are anything to go by, then it’s precisely her crafting of this type of story that makes realism suddenly all the more alluring.