With a reputation as one of cinema’s pioneering figures in the art of psychological thrillers, David Cronenberg’s latest offering A Dangerous Method (2011), starring Michael Fassbender, Viggo Mortensen and Keira Knightley, represents something of a radical departure from the ‘body horror’ movies with which he is most closely associated.

Taking a step back from the visceral physicality that we’ve come to expect from the mastermind behind such classics as Shivers (1975), Videodrome (1983), The Fly (1986) and Naked Lunch (1991), A Dangerous Method tackles the idea of psychoanalysis; more precisely, the work and studies of Sigmund Freud (Mortensen) and Carl Jung (Fassbender). 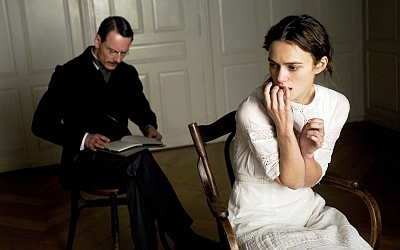 The film essentially revolves around the three leading cast members, with Knightley in the role of Sabina, an 18-year-old Russian Jew who is brought to Jung in an extremely distressed emotional state, at which point he sets about tackling her condition with Freud’s theory of psychoanalysis, with whom he subsequently initiates a correspondence in order to discuss her case. During this time the pair strike up a close friendship, while Jung also becomes embroiled in a romantic relationship with Sabina, despite being married with a child.

As a film based almost entirely upon the intellectual musings of two highly intelligent doctors, A Dangerous Method is clearly not a film that’s going to set pulses running in the manner of Cronenberg’s usual output. However, it is without question an extremely fascinating and thought-provoking reflection on a truly divisive psychological theory. With next to no action on screen for its 90-minute running time, the film relies heavily on its three leading performers, each of which delivers with unerring brilliance.

The ever-superb Fassbender is once again at the very top of his game, as is Mortensen as the mysterious and manipulative Freud, yet it is Knightley’s portrayal of Sabina that provides many of the movie’s most memorable moments. At times manically unhinged, her performance is occasionally difficult to watch, such is its disconcerting level of insanity, with her most psychotically charged episodes bearing a notable resemblance to Isabelle Adjani’s terrifically disturbing turn as Anna in Andrezej Zulawski’s 1981 cult masterpiece Possession.

While many will undoubtedly find A Dangerous Method a somewhat alienating experience, those with a passing interest in the world of psychology should be able to find at least something of interest within.

Win a DVD copy of David Cronenberg’s A Dangerous Method with our giveaway competition. Follow the link to enter.