★★☆☆☆
Adapted from one of William Shakespeare’s most complex, ambiguous plays, directed by British acting heavyweight Ralph Fiennes and with an ensemble cast that includes Vanessa Redgrave, Brian Cox, Jessica Chastain and Gerard Butler, Coriolanus (2011) certainly isn’t lacking in artistic pedigree. Where it does falter, however, is in transferring the Bard’s text cinematically. For all its bombastic soliloquies, one can’t help but think that Fiennes unique vision would have been far better suited for the small screen – or better still the stage.

Set in a somewhat inconsistent, contemporary interpretation of Ancient Rome, the film begins with scenes of violent protest on behalf of the hungry masses. Riots are widespread throughout the city state thanks to grain shortages, with the people’s fury rapidly becoming focused upon the Republic’s war-mongering general Caius Martius (Fiennes). Rome finds itself fighting a war on two fronts – with its own populace and also with the neighbouring Volsces, whose guerrilla-style army is led by Martius’ nemesis Tullus Aufidius (Butler). When the people of Rome eventually turn on the heroic Martius, stripping him of his most recent title – ‘Coriolanus’ – the proud warrior finds an unlikely ally in his most-hated enemy, and together plot heinous revenge against the city and its people. 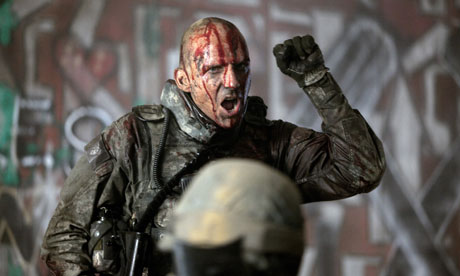 Fiennes does an admirable job of condensing down the themes and concerns of one of Shakespeare’s more inaccessible works (retaining the original dialogue, Romeo + Juliet [1996] style), but unfortunately his own resulting Coriolanus is, at best, a hit-and-miss affair. Fiennes himself, who appears both in front and behind the camera, dominates proceedings to often overwhelming levels, giving a larger-than-life central performance (“Boy”) more suited to the boards than the screen. Subtlety is clearly not on the agenda, with the supporting cast – including a superb Vanessa Redgrave – charged with bringing Fiennes back down from the rafters.

Redgrave is easily the stand-out performer, her militaristic matriarch Volumnia both Madonna and Lady Macbeth in equal measure, letting loose her dog of war only to plead mercy as he bites the hand that feeds. Cox is similarly on form as the manipulative, Machiavellian politician Menenius, backing Martius only when it suits him best. Most surprising of all, and perhaps most damning in terms of Coriolanus’ director and star, is the nuanced turn provided by Butler as Martius’ opposite number Aufidius, perhaps the Scottish actor’s best role to date. Fiennes is clearly a perfectly sound director of talent, yet ironically struggles to reign in his own performance to the film’s detriment.

For its unwavering commitment to Shakespeare’s original prose and intriguing modern political subtext (the Balkan-style mis-en-scene is no red herring), Coriolanus deserves some recognition. Yet as a directorial debut, Fiennes clearly has much to learn about both the cinematic medium’s – as well as his own – strengths and weaknesses.