Staying true to the fish-out-of-water formula favoured in such French films as The Visitors (1993) and My Uncle (1958), Hollywoo (2011) marries modern day Hollywood setting in all it’s pearly white glamour with a neurotic and feisty French actress. Needless to say the two worlds collide with potentially hilarious consequences.

Jeanne (Florence Foresti) is a French voiceover actress for hit US show LA Couples, dubbing for the lead actress Jennifer Marshall (Nikki Deloach). She also believes that she has a renewed contract for the third series as claimed by her agent (played with believable luvvie sycophantism by Muriel Robin). However, in a turn of bad luck, Jeanne is told in no uncertain terms that she is yesterday’s news and must fend for herself in the business of hard knocks – her contract is not renewed, but finished. 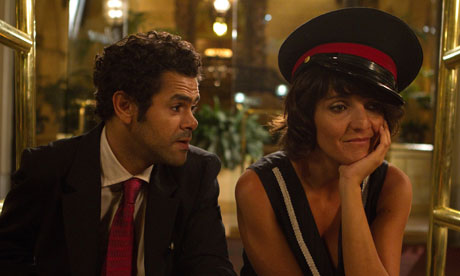 Jeanne cannot believe that Jennifer Marshall has resigned from LA Couples citing a nervous breakdown and takes dramatic action to save her career. With nothing to lose, she embarks on a trip to Hollywood to find Sarah Marshall and convince her to join the show again. Trying all manner of creative guises and approaches to get near to her American voice double, she meets a host of psychotic and eccentric individuals with alarming frequency along the way. Essentially her male counterpart, another French compatriot lost at sea is Farres (Jamel Debbouze) a master of almost succeeding in cons and playing the Hollywood game with French charm and a swarm of words sure to confuse all he meets.

Hollywoo offers a blurred, bright, fabulous but mostly ridiculous representation of Hollywood told via very obvious stereotyping from all over the world. Unfortunately, there are often instances where in jokes do not translate to Anglo-American audiences. It’s a light-hearted comedy about the underdog, the honest and the dishonest, about love and loss and anything else this crazy world throws at us; and perhaps just what you can do if you want something enough.

Hollywoo is possibly one for off-beat French comedy enthusiasts only. It’s an exhausting exploration of the French take on Tinseltown which though punctuated with a few laughs is a little too surreal and may fail to woo audiences outside of France.