At the centre of Clint Eastwood’s biopic of FBI founder J. Edgar Hoover is an underdeveloped examination of his quasi-homosexual relationship with his deputy Clyde Tolson. The filmmakers’ treatment of this particular story-strand perfectly represents what is good about J. Edgar (2011) and where it falls down; it has moments of interest but fails to really deliver on any of them.

Leonardo DiCaprio portrays the titular character throughout his life spending swathes of the film under blotchy make-up along with Armie Hammer playing Tolson and Naomi Watts as Hoover’s loyal secretary Helen Gandy. Hoover dictates his memoirs to a series of changeable agents and the majority of the action is watched though flashbacks right from his beginnings in the Department of Justice as an administrative nerd enamoured with indexing and dominated by his strong-willed mother, Annie (Judi Dench). 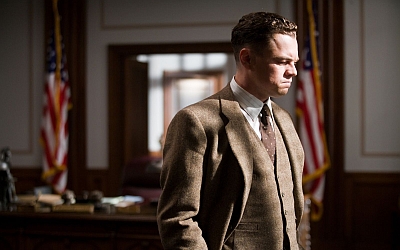 Having been assigned to head the newly formed FBI, Hoover sets about making sweeping changes by drafting in new, better agents and beginning a worthwhile battle to bring fingerprints and expert testimony into the courtroom. Concurrently he meets, and is immediately taken with Clyde Tolson, who he hires despite the latter not being qualified. He and Tolson begin to dine and vacation together but at the crucial moments the film refrains from delving into the issue fully.

As Hoover and his FBI G-Men fight to bring down the John Dillingers and Al Capones of America, he descends into an increasing paranoia and his desire grows to have every citizen on a centralised database like the library that he organised as a youngster. We are given glimpses at why Hoover’s secret files made the rest of Washington uncomfortable, but the effect of his intrusive methods and surveillance on the Capitol and American life is omitted almost entirely.

As its slow and saccharine ending would suggest, the real story here is of Hoover and Tolson but J. Edgar shies away from exploring the character’s sexuality explicitly preferring to subtly suggest and tip the odd hat to the many rumours about his private life (such as the claims that he was a cross-dresser).

The performances are generally solid although DiCaprio stands out significantly. He does have a few tics which seem out of place – wiping his hand after shaking someone feels like a hangover from Howard Hughes – and much of his performance is lost beneath the latex of Hoover’s later years. That would seem to sum up J. Edgar’s problem though; an engaging story that Eastwood has chosen to bury a little too deep.