Rachel McAdams and Channing Tatum are both arguably enjoying the primes of their respective careers; McAdams has put in face time for Woody Allen and is to star in the next Terrence Malick curiosity, whilst Tatum can imminently be seen stripping off for Soderbergh. Mainstream calculations rule that they are both hot properties to star in an aggrandising romantic comedy, and that they do in Michael Sucsy’s The Vow (2012), which charts the journey one man takes to recapture the heart of his one true love.

Based on the novel of the same name by Nicholas Sparks, The Vow sees McAdams and Tatum play Paige and Leo, a happily married couple torn apart by a fateful car accident which puts Paige in a coma and robs her memory of their five precious years together. Waking up with her brain reset back to the time when she was a diligent law student striving to please her controlling parents (blankly played by Sam Neill and Jessica Lange), Paige has no recollection of her abilities as a gifted sculptor, the long-standing feud with her deceiving parents or her relationship with Leo, which prompts his fierce attempts at regaining her affections in spite of conveniently placed obstacles. 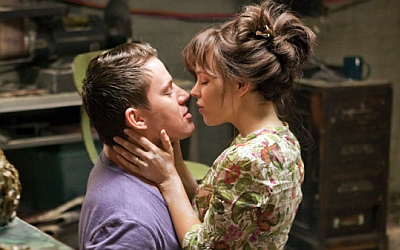 Reminiscent of existing romantic comedies that use amnesia as a backdrop for insufferable and tactless depictions of blossoming romance, from Goldie Hawn vehicle Overboard (1987) to the more recent 50 First Dates (2004), The Vow takes its narrative gambit and bleeds it dry, exposing the audience to a smorgasbord of sentimentality that is as alienating as it is excruciating. Of course, any by-product of the aforementioned Sparks and his ever-increasing school of schmaltz that grapples the rom-com genre and pads it out with profitable philanthropy, comes pre-packaged and sold to a particular demographic, yet here the ingredients wear desperately thin and overwhelm a mostly impressive cast.

Conveying the same levels of vacuity he conveyed in such films as Dear John (2010), Tatum’s Leo is an entirely airless protagonist rarely able to convincingly express his undying devotion to Paige, rendering their would-be idyllic romance altogether insincere and fabricated, a veneer made progressively more transparent. Tatum also contributes the film’s erratic narration, droning on about “The moments of impact that define who we are” and used as idle filler whenever the melodrama gets to be too heavy-handed for Sucsy to handle. For all Tatum’s passiveness, McAdam’s does the best with what she is given, lending her increasingly unlikeable Paige a semblance of plausibility amidst her exaggeratedly idealistic surroundings.

Sucsy lathers on the mawkishness in a clear attempt at stressing how supposedly tragic the accident, which the film opens with, is, but it rings false and artificial. The Vow is ultimately drained by its commitment to a will-they-won’t-they dynamic made all the more redundant by a strict adherence to formula, robbing it of originality or anything remotely resembling a sense of affability.