Paweł Pawlikowski’s enigmatic drama-mystery The Woman in the Fifth (2011) is a true multi-national production in every sense of the term, bringing together a Polish director, an American lead (in the world-weary form of Ethan Hawke) and a French-adapted screenplay based in the Parisian suburbs. Yet even with such an eclectic creative team, there is little tangible substance or coherency to grasp hold of beyond the initially intriguing smoke and mirrors. Hawke plays chino-clad American writer and lecturer Tom Ricks, arriving in Paris to see his estranged daughter Chloé (Julie Papillon). Ricks’ ex-wife is visibly disturbed by this unannounced visit, calling on the police to enforce a reputed restraining order. 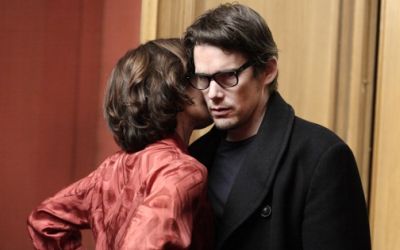 During his getaway, the bespectacled novelist loses his possessions and, with only his passport to his name, rents a dilapidated room on the outskirts of the city. Determined to battle for custody of Chloé (and with seemingly no intention of reporting the theft to the police or US embassy), Ricks begins working for his shady landlord Sezer (Samir Guesmi). Outside of his new role, Ricks also begins a romantic affair with book-wormy widow Margit (Kristin Scott Thomas). However, with his mental health rapidly disintegrating, the besieged writer struggles with separating fact from fiction. Despite looking every bit the writer abroad, Hawke’s pigeon French is excruciating to listen to.

It makes perfect narrative sense that Ricks would have only a rudimentary knowledge of the local lingo, but his unconvincing attempts at mastering the French accent do neither him, nor his character, any particular credit. In truth, Hawkes appears miscast throughout, struggling to convey what little direction he may have been given in a somewhat thankless role. Scott Thomas does slightly better as femme fatale seductress Margit, but her intentionally stark back-story and dubious character trajectory gives the Anglo-French actress little to get her teeth into, aside from a few lust-fuelled tête-à-têtes. Numerous scenes between herself and Ricks descend into outright pomposity, with neither character able to shake off their own mask of scholarly pretension. Pawlikowski and his compatriot cinematographer Ryszard Lenczewski should be commended for their dreamlike realisation of the Parisian suburbs, yet aesthetic considerations are only ever half the battle. The Woman in the Fifth feels consistently flimsy, under-written and self-important, a film obsessed the writing process that ironically needed more time spent at screenplay level.

Win one of three DVD copies of The Woman in the Fifth with our latest giveaway. Follow the link to enter.