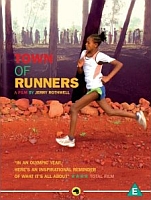 With the London 2012 Olympics looming ever closer, Jerry Rothwell’s documentary Town of Runners (2011) serves as a timely reminder of how dedicated and determined the athletes who compete need to be in order to represent their individual countries. Taking the rural Ethiopian town of Bekoji as its subject, Rothwell’s film parts with the usually clichéd approach to depicting a poverty-stricken country and instead opts for an upbeat, if a little slight, tenor that is both light-hearted and refreshing.

Following Alemi Tsegaye and her friend Hawii Megersa, two determined teenage athletes driven to succeed by their ruthless, but good-natured, coach Sentayehu Eshetu, Town of Runners acts as both a depiction of these two girls’ ascension to more suitable and qualified training camps as well as an illustration of Bekoji itself. Made in 2009 during the creation of a tarmac road leading to the capital Addis Ababa, something that promises the numerous runners in the town a more level and sturdy plane to train on, the film is compelling mostly through its delineation of the minute forms and details of survival that we normally take for granted. Battling the ever-present threat of poverty, the citizens depend on their athletes to transcend their bucolic confines and run to a successful future that ensures their locale remains on the map. 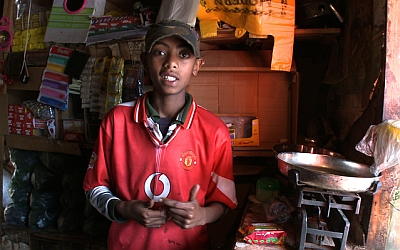 Bekoji itself has produced more Olympic medallists than a number of other worldwide locations, a statistic that keeps the locals hopeful and optimistic even as they donate portions of their meagre salaries to support an athletics department that lacks a sufficient running track. It would have been all too easy for Rothwell to become somewhat too involved in the various day-to-day hardships these people face, but his documentary perfectly reflects the hopeful positivity the residents have in their athletes, even when they are being pushed to the limit by coach Sentayehu, who at one point shouts “Vomit and keep going” as his students tackle a steep grassy hill.

Perhaps the most fundamental message that Town of Runners conveys is that running is not just a sport for the inhabitants of Bekoji, but an intrinsic and imperative way of life, their sole reliant in a desperate struggle against a frustratingly, and consistently, cash-strapped government. Biruk Fikadu, a young clerk at a local kiosk – who dreams of studying to become a doctor, states, “Sometimes it seems everyone in this town if crazy about running”, a fact that is made even more prescient when the mother of 14-year-old Hawii coolly laments that her only options in life are marriage and running, and little else if she fails at both.

As well intentioned as it may be, the documentary does precious little to really mine the integral part running plays in both Hawii and Alemi’s future, instead voicelessly portraying the occasional setbacks they individually face at marathon races and the misleading and financially unsustainable training camps they join. Yet for all its occasional shallowness, Rothwell’s Town of Runners remains a sunny and inspirational little document of such an ambitious town, and perfectly captures the tenacity of the human spirit.