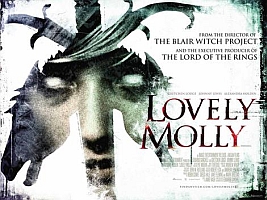 From one half of the team that brought us The Blair Witch Project (1999) comes Eduardo Sanchez’s Lovely Molly (2011) – a severely unnerving yet utterly absurd horror which whilst an incoherent mess, is an undeniably harrowing piece of extreme cinema.When Molly (Gretchen Lodge) and her new husband Tim (Johnny Lewis) move into her late father’s countryside home, it doesn’t take long for the painful memories of Molly’s childhood to re-emerge.

Disconcertingly opening with what would appear to be found footage, Lovely Molly initially looks set to be yet another cheap and familiar jaunt into this tried and tested horror sub-genre. However, thankfully Sanchez quickly retreats to a more conventional approach to filmmaking, allowing the audience to observe and immerse themselves in the atrocities that present themselves on screen rather than being confined to the narrow viewpoint of one central protagonist. 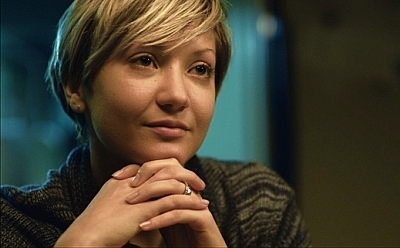 A muddled, over-ambitious mess of various concepts and obligatory hand-held camera work, Lovely Molly script is a horrendous cornucopia of misguided and hodgepodge themes all carelessly sewn into an ugly patchwork of familiar horror troupes. However, despite this chaotic scatter-shot of incompatible ideas Sanchez’s latest excursion into the genre is a genuinely unsettling experience which whilst profoundly confusing does a fine job a constructing a genuinely dark and oppressive atmosphere of nail biting dread and discomfort.

The one element that ultimately holds this befuddled film together is the astonishingly assured performance of Lodge. Her uninhibited and incredibly fearless portrayal of a woman utterly destroyed by the repressed memories that haunt her is phenomenal, stripping away the conceited veneer of most actresses to present the audience with an unrivalled austere female depiction of addiction and mental anguish. Simultaneously appearing both fragile and terrifying Lodge turns a mediocre film into a memorable exercise in paranormal horror filmmaking.

Genuinely horrifying and consistently tense, Lovely Molly is a film that’ll stay with you long after you leave the cinema. Unfortunately the film’s durable and lasting narrative does little more than highlight its numerous plot holes and eschewed logic, ultimately culminating in a disastrously flawed, if admittedly scary film which fails to hold up on closer inspection.