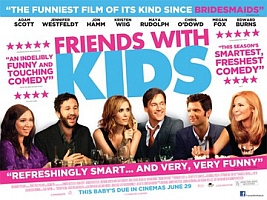 Jennifer Westfeldt’s directorial debut Friends with Kids (2011) is the kind of messy, callous and nepotistic American ensemble comedy that can only be made by an overly pretentious, well-connected filmmaker. The great tragedy is that although Friends with Kids has made a relatively paltry $7 million since its US box office opening, it’s probably more than enough to cover the costs which could lead Westerfeldt to a second bite at the directorial cherry.

The story itself bares all the hallmarks of having been conceived after a few drinks at a fancy party, potentially written on the back of a cocktail napkin. Julie (Westfeldt) is having dinner in a restaurant with her best friend Jason (Adam Scott) and two couples: Leslie (Maya Rudolph) and Alex (Chris O’Dowd) and Ben (Jon Hamm) and Missy (Kristen Wiig). Annoyed by the naughty children who are interrupting their meal they bitch and moan about parents who bring their children to high-end eateries. 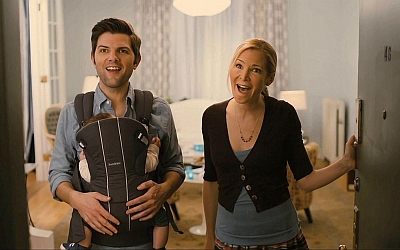 A few years later, the couples are all knee-high in nappies and thoroughly miserable, except for Julie and Adam who are still enjoying the life of the single New York socialite. However, with her biological clock ticking, Julie decides she wants a child and Adam volunteers, as long as they can share custody so neither has to give up their thrilling lives.

Firstly – and most importantly for a comedy – Friends with Kids is simply not very funny. The few laughs there are come from the bickering O’Dowd and Rudolph, but even their shtick is clichéd and obvious. The talented Wiig and Hamm barely feature, and whilst neither disgraces themselves, their characters are uninteresting at best. As for Westerfeldt, it’s difficult to recall a leading lady who has had so much work done – and it is exceptionally distracting.

Perhaps you have to be well-over 30, narcissistic and childless to appreciate Westfeldt’s nuances. Some established critics have sung her praises, and it certainly could be argued that a divisive film is a worthy film. However, in the case of Friends with Kids, the temptation to head for the cinema exit and ultimate freedom is mightily tempting.