Beautifully shot in both CinemaScope and 16mm, Glastonbury the Movie (in Flashback) (2012) puts audiences right in the middle of the world’s greatest music festival. Robin Mahoney, the film’s director, has recreated the original 1995 film from scratch, moving sequences around, improving the sound and visuals and adding on over thirty minutes of compelling unseen material.

Glastonbury has an illustrious film history, captured in all its hippy glory by Nicolas Roeg in Glastonbury Fayre (1972), Julian Temple in his 2006 film Glastonbury and most recently once more by Temple in Glastopia (2012), which explores the alternative fields of utopian beliefs with names like Shangri La, Arcadia, Block 9 and Strummerville. In many ways, Mahoney’s film is superior to all three, mainly because it lacks the self-consciousness of festival-goers caught on film. What we get is a sense of the actual hazy, drawn-out experience of being there in person, as well as an invaluable look at an as-yet poorly documented period. 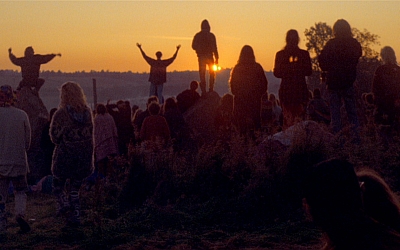 The Glastonbury Festival is fascinating as a snapshot of early 90s fashion, music and youth subculture as a whole – you’ve got hippies, Ravey Daveys, acid-heads, stoners, vegans and an eclectic mix of music styles. The musicians featured in the film might not be familiar to younger audience members – aside from big-hitters Spiritualized, Stereo MCs and The Verve – but this shouldn’t get in the way of enjoyment of the film. In a way, it almost helps, encouraging the feeling of having wondered into a tent and discovering something you’ve never heard before.

Those interested in youth fashion will also take much away from Mahoney’s doc. Think crop tops and crimps, white Rasta dreads and shaved heads, Backstreet Boys fringes, terrible tie-dye and hippy dippy florals. Forget the Glastonbury, you see today – this film is arguably a record of the Glastonbury Festival the year before it ‘sold out’, before TV cameras started broadcasting live in 1994 and the main stage was taken over by mainstream acts.

Mahoney’s film maintains an unusual, non-narrated form with no interviews throughout. Thankfully, Glastonbury the Movie (in Flashback) also avoids the usual corporate advertising and pseudo-hippy jargon associated with big festivals, allowing us to sit back and enjoy a ramble through the muddy fields of a British institution.