The Pact (2012), the new horror outing from writer/director Nicholas McCarthy starring Caity Lotz, Agnes Bruckner and Casper Van Dien, blends a creeping insidiousness with visceral shocks to create a scare-you-witless experience. Following the death of her mother, Nicole (Bruckner) sets about clearing the family house. Arriving early one morning to help, her sister Annie (Lotz) can find no sign of Nicole.

As time progresses several bizarre incidents take place convincing Annie that something sinister is going on, culminating in a full-on paranormal manifestation that puts her life at risk and almost kills her. Distraught, Annie approaches the local police with her story, where a sympathetic officer called Creek (Van Dien) offers to help. Initially sceptical of Annie’s claims, Creek changes his tune after accompanying her to the house where he experiences a series of freak occurrences that have disastrous consequences for all those involved. 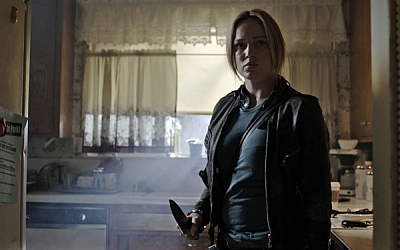 The Pact shouldn’t really work, as it builds its central theme around constituents which we have all seen before. Where other films however may have fallen flat by rehashing old clichés, The Pact appears fresh by keeping much of its horror hidden until well into the proceedings. When the perpetrator of the events which are terrorising Annie are eventually revealed, it still keeps the details to the bare minimum, an approach which helps maintain the film’s genuinely unsettling demeanour throughout.

It’s a testament to the film’s ability to unsettle that several scenes will make you jump, despite the fact that something extremely unpleasant is about to happen is frequently sign posted a mile off. Where the climax is concerned – lets just say it was obviously designed to be watched from behind your fingers.

Newcomer Lotz puts in a polished performance as Annie, in what is for most of the time a one woman show. Though her fellow actors give great support, it is her portrayal of a bewildered young woman pushed increasingly close to the edge by the bizarre events which lead up to the film’s frenzied finale, that leaves the most lasting impression.

A beautifully sun-bleached California provides a vivid backdrop for the sinister events McCarthy’s The Pact to play out against, resulting in a simplistic film which should remind horror fans just why they love being scared.